Occasionally I actually get inspired by the boxart of a set of figures or a picture in a rule set or reference, like with my Empire Warmaster figures - painted to the Emprie style in the rulebook - and I try to do my best to reproduce what I see, as was the case here. 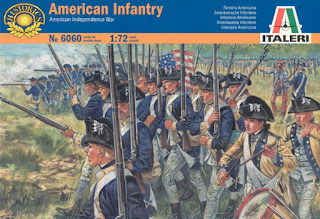 These troops are the first batch from the 6060 Italeri American Infantry set and the boxart shows a regiment of blue coats and yellow facings, carrying either the 1775 or 1777 'national' flag.

A quick flick through the uniform tables in the Black Powder: Rebellion! supplement indicates that the only unit with these colours was the Rhode Island State Infantry. As it lists them for the period 1777-1783 with this uniform, I grabbed a 1777 flag from Warflag.com.

The figures have come up a treat using the painting style covered in a previous post and I think are some of the best figures on the market for this period/scale. But I have to also agree with the comments from the PSR review.

So, continuing on with this period/scale ran aground when I started searching for American Continentals. The only plastics available were in this set and in summary here's the problems with it:
- you only get three of each figure in each set
- some of the poses are not great and there's only one advancing pose
- one of the firing poses depicts a man with his hat flying off in the wind (why???)
- the standard bearer has a sculpted flag that covers the majority of his body
- all figures are sculpted with their stockings down - as common only on the hottest summer days

This was not a well thought out production.

To add to this, and something PSR actually missed, is that two of the other firing poses have their hats sculpted sideways. A niggle to most perhaps but the soldiers would probably have been flogged for wearing their hats in this way - regardless of how silly it would look in real life. [Edit 2021: subsequently read that this was actually a style of wearing hats as they progressed into the bicorns that followed this period - still be after the war though, so 1790s - but good enough for me]

Hat issues with the set, pic from PSR review of the set.

Considering the faults in the production of the set nearly derailed my entire AWI project. The resolution required 'thinking big', planning the associated assaults on the bank account and an acceptance that at least 3 - 4 units would include some serious 'hat handling' with Exacto knife and superglue.

So several years and 8 set purchases later and happily the results speak for themselves, for 'arms length' standard wargames figures, I'm really happy with the finish because of the bonuses of this set, which are: 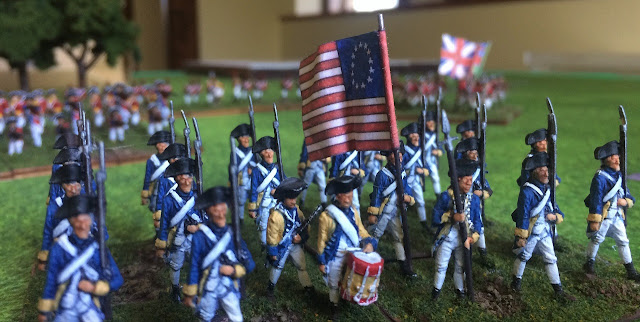 1. The good poses are very good, so that when there's 24 of them together, they provide a decent, regimented feel to a BP unit.

2. The sculpting and details are excellent and lend themselves well to painting.

4. Unlike the PSR review, not one box of the eight had any flash problems whatsoever and the mould lines follow the sculpting detail well enough that it only takes five minutes to prep a BP unit for the undercoat.

Given the caveats above these are good figures and paint up well.

Yes this set has some fairly hefty issues but when considering each standard sized BP unit has 24 figures, and for a decent game you'll want several brigades worth of figures, of 3-6 units a brigade, then 'thinking big' pays dividends.

So all in all a good result and the eight boxes needed to produce decent BP battalions seems to be paying off - I may have different feelings should my knife slip during one of the 72 upcoming hat conversions!