Edge of the Empire: Splinter of my Mind's Pie

Something a wee bit different, a game report for the RPG Edge of Empire by Fantasy Flight Games. So quite a long post BTW focusing on getting as many shots of the figures and terrain as possible - so heaps of eye candy.

Nick came over and wanted to try out EoE using some of his (now long OOP but available from ebay - check out Noble Knight's ebay Store) Wizards of the Coast figures, so I said I'd break out the Battle System Terrain.

Set Up
I spent a good while remembering how to build the terrain and finally settled for a simple Imperial bunker complex. 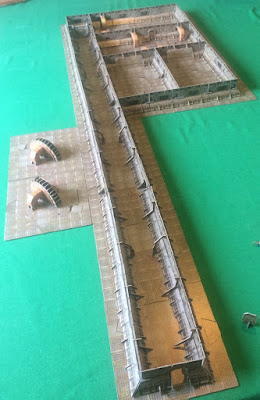 The idea was to swap out scene dressing as we went to make different locations which kinda worked well, with the basic set up having a few open rooms, a traditional long corridor for shoot outs, and a closed room for added mystery.

Scenario
My character Jack Mattwe - Space Pirate (oh yea!) had been hired by Yog Soggoth - Space Pirate to receive some information and a droid being held by the Imperials.

Part One: Location of the Information

First up Jack had to grab the information regarding the whereabouts of the droid and its speical information from an Imperial base.

So Jack and R5 sneak into the base dressed as an Imperial captain - well Jack was dressed like an Imperial Captain, not R5.

R5 trips the door on the second go.

And we head to the command room of the base way down the far end of the corridor.

... way down the end of the corridor. 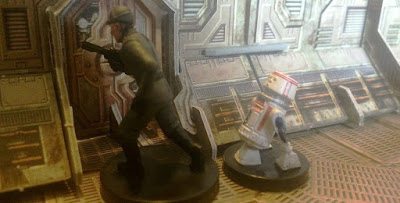 ... and we're greeted by the base commander (Captain Bob).

Through some fast talking and good deception and skullduggery rolls I convince the commander that we were there on official business of Jeff (you'll need a tray) Vader; and he lets us waltz in past the guards...

... and into the main complex full of stormtroopers and imperial engineers.

I negotiate for R5 to interface with the systems and get the information we're after, again rolling well for deception. 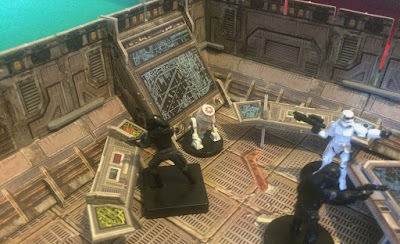 Yes, this terrain is as amazing as it looks!

The Imperials may be slow and a little gullible but R5 had used some old codes to trip the doors and questions started flying.

But we were able to maintain our guise with a Triumph Deception roll when it counted and head out, but were caught by the base commander and our rouse was discovered.

We shot through the internal door and R5 rolled a successful lock.

Which left us in the middle of the corridor with sirens and alarms blazing around us.

More stormtroopers burst in from the main entrance.

As well as a couple appearing in the control room from the corridor behind us.

But I ordered the troopers to get the door open with another deception roll and fled down the corridor; the base commander got his act together and then the lights went out as R5 got his system stuff together (Nick as GM was kind).

But by that time R5 and Jack were out and Jack changed out of the Imperial uniform (mostly because it was chaffing badly) and headed back to find Yog Soggoth.

Part Two: Information of the Location

So I went to see Yog at his apartments for some clarity.

As R5 downloaded the captured information, Yog started touting an MF attitude along the lines of "How dare you bring me the information I asked for..."

So got the red rage.

With Yog unconscious from the blast and now tied up, R5 and I went 'splorin in his apartments and nicked 100 credits.

Then after a good talk about attitude along the lines of  "space is hard enough without *%#^$ like you making it harder" Yog agreed to get on with the next part of the mission and we met up with an associate of mine on Yog's star freighter - Bob the Boffen (called Boff from here on) on route to Dantooine.

Part Three: The Temple on Dantooine 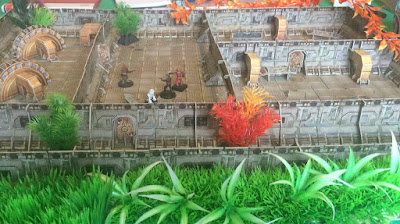 So we needed to get R5 into the temple and retrieve some valuable information which Yog's droid could use to great advantage, but the place was crawling with Imperials.

Turns out the temple was the main power generator of the area, drawing power from a volcano near by.

So day time visits coincided with a heavy Imperial presence. 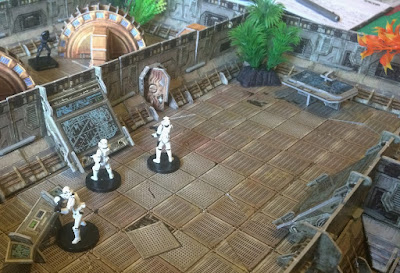 Including droids, guards, and engineers.

Although some areas were a little less occupied and maintained. 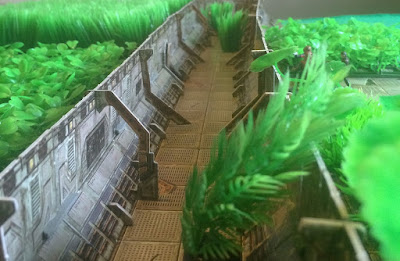 But the front door looked inviting...

But were rudely accosted by the guard scouts and told to sod off.

With such a heavy presence we went back to the hanger where the freighter was parked to have a good old chin-wag about what to do next; and wouldn't you know it Bob the Davonian shows up, all Mr Exposition like.

For a price hes got a secret way in and knows when maintenance is occurring. Dangerous maintenance, so the temple is not posted  - oh yea! So we wait till 2300 and pop up in a maintenance closet, smack in the middle of the complex - we've got 30 mins to get the info and get out. 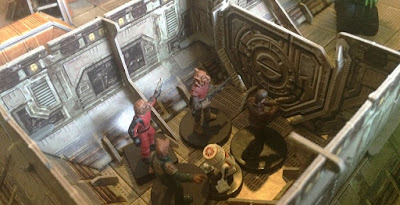 And lo and behold, the Davonian is right, its pretty  much deserted. 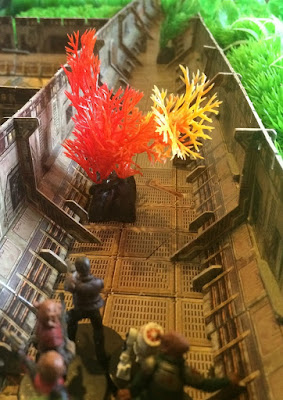 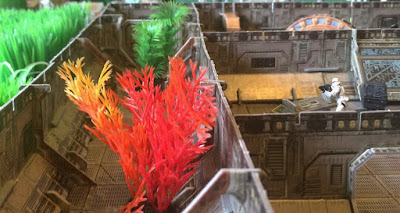 So we burst in, not sure how to play it but the clocks ticking. 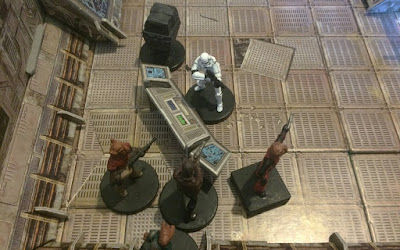 So we start firing, seems the best thing to do, and troopers start to drop, until... 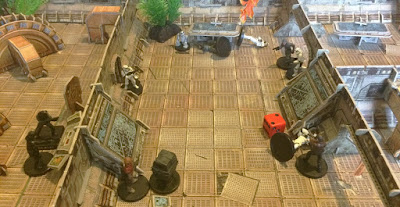 But we've lost time and only have 8 minutes left, so we get R5 into action as the alarms start blazing.

But we make it out just in time thanks to the Davonian who heads away with a nicer little earner. 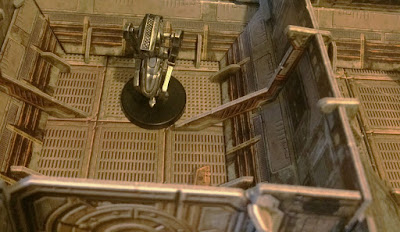 Yog's droid is  being held by the Imperials on level 15 of a droid reprogramming facility in an Imperial City nearby. Now we have the information the droid can use to great advantage, we need to get the droid itself. So we grab a taxi from the spaceport and head on in to the city.

Upon arriving at the building where the droid is being held, the Rodian driver - Dragos Tona - is persuaded to join us for 500 credits.

We take the lift to the 15th floor all nonchalant-like, walking right past Imperials and civilians alike.

After a brief chat with Major Major in the lift - where we convince him we're bounty hunters taking R5 in for reprogramming - we reach the level and break out HK-149... no problem... 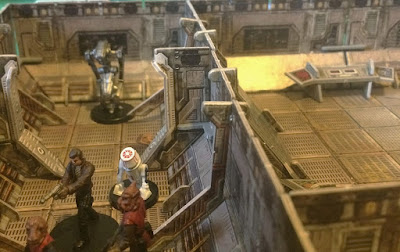 ... well... so we trip a door and the alarms start ringing again, what could possibly go wrong? 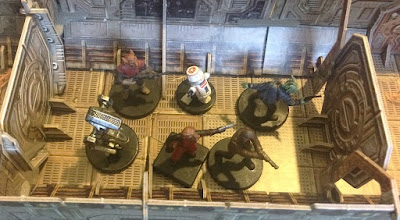 Stormtroopers, lots of them... we start firing at point blank, its the right thing to do.

As the air becomes filled with blaster fire casualties start falling on both sides, even Boff goes down in a smoldering heap, but eventually the corridor is filled with dead stormtroopers.

We make a break for a launch pad near-by while R5 trys locking the door and HK-149 remotes the speeder, and further Imperial troops show up. 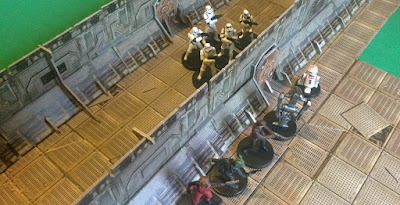 But the troopers spring the door and they start firing.

Down goes Yog Soggoth - he'll be sorely missed - just as the transport shows up.

And in a hail of blaster firing from the emerging stormtroopers we fly away to safety... classic. 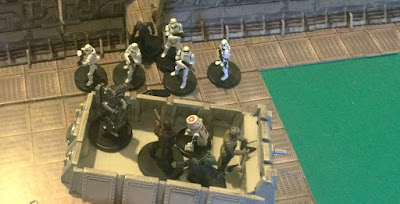 Heaps of fun, played like 5th Ed. DnD with droids and Imperials. 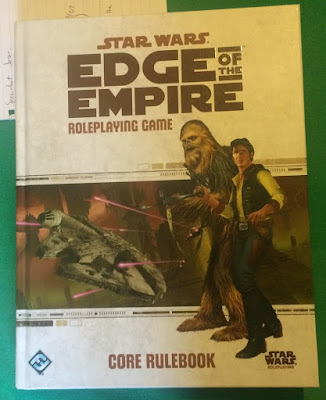 Jackstorm
My blogs on wargames, life, music, horses, and free novels. All supporting the theory that there is more than one reason I'm single.