Then There Was Four: Collecting 1/72

So a package arrived in the post the other day - oh yea!

Two boxes of OOP French Infantry for the American War of Independence, to complete a total of four boxes - more on this later.

I've been after these things for years and years, then earlier this year a mate of mine Tim, offloaded six boxes of 1/72 scale AWI figures. Six! One of which was the long OOP French.

I warned him and did my best to convince him that they were now collectors items and selling for as much as £25; trying to foist fistfuls of money upon him, but as a true gentleman he gave them away. Thanks Tim!

This triggered my OCD (Obsessive Collectors Disorder) and I wondered how I could find the other three boxes I needed.

This is because there are some very varying pose qualities in a single box and you only get so many figures of one pose per box. So when collecting 1/72 figures and building BP units, you spend a lot of time trying to divide 24, 12, and 6 by the figure numbers listed at Plastic Soldier Review, then subtracting the number of command figures available; and producing the number of boxes you *NEED* to buy. 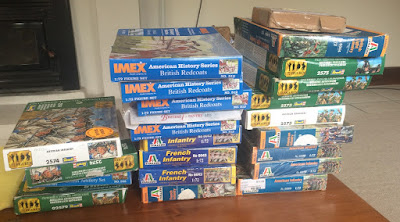 About half of my AWI 1/72 collection - I still need four more boxes of Americans!

So I went onto my friend - eBay - and started playing with the search functionality (to those familiar with eBay's search functions you can skip this bit).

To get rid of these sets from the results, I narrowed the search by removing those listings with the words 'line', 'napoleonic' and their box numbers; by adding a '-' before those terms.

Accurate but it returned nothing because there were no current listings -  :( - and I cried hot tears of disappointment...

I didn't want to have to keep checking eBay for this listing, I'd been doing that for years and getting nowhere. So I created a regular and automated search using eBay's Follow Searches function, using the search string above.

eBay emails you when a new listing which meets the search criteria is put up.

Within three months of setting up the followed search, I was the proud owner of the three additional boxes of infantry I was after - remember these are rare OOP boxes - like hens teeth.

What joy and excitement prevailed in those early mornings, I can tell you, for me and even my two cats - who were rudely awakened from their respective positions on the bed by my hoots of merriment - to wake up to emails offering me the boxes of these long OOP figures - mostly because I'm a sad old git without a girlfriend :)

Now alls I need to do is paint up the regiments!!