Thought I'd get this scenario up after posting the previous No Relief from the Midday Sun scenario.

An A4 PDF of the scenario can be found here.

While the East Surrey Regiment and Royal Engineers set up communications and a fortified position a few miles to the east of Hashin, in the west, Ansar were sighted around a hill called the Dihilbat feature, and Graham sent his Indian Brigade, several regiments of foot, and elements of cavalry, forward to drive the Ansar from the feature - supported by the Guards Brigade.

Several smaller assaults and engagements followed but fearing envelopment by flanking Ansar from Tamai, and due to an over extension of division forces across several miles, before the Ansar made a more determined assault, the action resulted in Graham withdrawing his forces and subsequent battle at Tofrik the next day.

This scenario explores the 'what if' possibility that the Ansar mounted their attack at Hashin rather than Tofrek, before Graham had a chance to withdraw.

Area Around Hashin
The area around Hashin was open, yet covered with scrub and mimosa (6-8 feet high in some places).

The major features of the Hashin area were the Dihilbat spur or hill, and Beehive hill next to it, where Hashin was actually nestled - which can be represented by several small huts against the north-west of Beehive Hill.

Further to the north-west was another feature of broken ground called the Low spurs of the Waratab.

Tamai lay some miles to the south-west and was then a centre for Ansar troops.

There is an excellent map of this area on page 147 and description of the action in Lt. Col Snook's Go Strong into the Desert, published by Perry Miniatures.

Graham's division ended up spread over several miles, from Hashin and back east across open ground to the minor features where the Surreys and engineers were creating their redoubts.

Set Up
On the day, there were several sightings and interactions with the Ansar between 0940 and 1225, but no concerted major attack.

This scenario considers the situation where the Ansar, at some point between those times, made a coordinated and major assault of Graham's forward (western) elements, with original dispositions of those elements used as starting positions.

This makes the Dihilbat feature, Beehive Hill, and Low spurs of the Waratab the key features for the the scenario table.

So far we've used 280cm x 150cm and 300cm x 240cm tables to good effect for this scenario. I'm not sure what this is in Imperial measure, probably a few cubits and Google can do the conversions for you... or alternatively it may be easier to move to a country that employs modern measurements... :)

As we know the lay of the land, on the British side of the table, set up should include Beehive Hill (hill feature) and Dihilbat Hill (large hill feature). These should be set up on the table edge in the centre, with just enough room between the features to house a British square.

If you are fortunate to have enough terrain, the Dihilbat feature should stretch almost across the board and be set up on the British player's left. 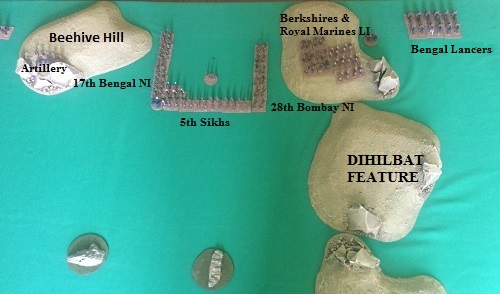 The Low spurs of the Waratab should cover a good portion of the Ansar player's left quarter and represent uneven, undulating even, semi-broken ground, and stretch up to the centre of the table. 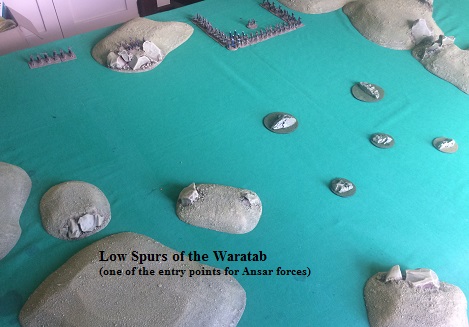 The rest of the ground was fairly open but much of it covered in scrub and Mimosa, so if you have these terrain pieces, a good portion of the open ground can be covered in scrub - providing further cover for the Ansar.

Most features are rocky or covered in scrub. Given the superb tactical use by the Ansar and effect on British cavalry (they get mauled when fighting in it), Sudanese Rough Ground is as follows: as per Rough Ground, plus Unclear targets, Ansar infantry get Cover, -2 morale saves to cavalry fighting H2H in it.

Measurements are for 20-28mm standard basing and Brigade Square rules are used, with even partial brigade squares claiming supports from other units in the square. All Cav units are Marauders.

Unless otherwise specified, units are assumed as listed in Blood on the Nile supplement.

Forces
Commanders
Each side gets two commanders, including the army general.

For some reason this scenario suits a ratio close to 1:1 British:Ansar rather than 1:1.5. I think this is because the terrain favours the Ansar and the African (slave) Riflemen are given a shooting quality of 3 (as per the indications of their projected firepower in Michael Asher's history of the Sudan conflict called 'Khartoum').

Its worked twice so far, but if it seems weighted in the Brits favour, chuck a couple more spearmen units into the mix for good measure, and stir thoroughly. Or vice versa.

Dispositions
Along with the lay of the land, we are fairly certain of the dispositions of the British on the day. As such, at the start of the game:

See photo map above for indications of British dispositions at the beginning of the game.

For the Ansar, we know where they were around 0940, massing around the Low spurs of the Waratab and several masses of Ansar were south of the Dihilbat feature and on the feature itself. We also know that Tamai was not that far away to the South-west. As such:
Victory
Gentlemen and woman will either concede or not force their opponents to continue, perhaps before one brigade is entirely broken and the other is mostly shattered.

I hope you enjoy the scenario as much as we have.
Posted by Jackstorm at 14:27 No comments:

Sudan: Scenario: No Relief from the Midday Sun

Having finished a bit early for the year and having received my "Xmas Present" to myself in the post from Newline Designs (20mm Hadendowa, Yorks and Lancs, and some dismounted camel corp to provide dismounted cavalry options), I thought I'd write up a scenario for when they are all painted... hopefully sometime in January... hahahahaha...

... well given all existing Hadendowa will be re-based and touched up... it might take a bit longer...

Anyhow, given the success of the Battle of Hashin scenario, fought twice now, here's one which uses the Brigade Square rules.

Note all measurements are made in metric... because its the 21st Century and base 10 is king - who the hell uses fractions any more... but its easy to remember that 12 inches = ~30cms.

An A4 PDF of the scenario can be found here.

No Relief from the Midday Sun

In the north of Sudan, a brigade has been caught out in the open, on its way to relieve Gordon at Khartoum.

For two days at least, dust on the horizon, coupled with glimpses of Ansar in the distance, has convinced the brigade commander that an attack is likely.

Fearing the worse, they have formed their brigade into a square and set the cavalry off to reconnoiter. 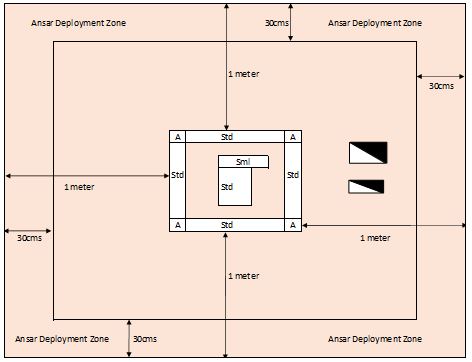 As it might be a bit of a stretch for some to build a table of this size (232cms x 232cms), just note that the scenario is set for the Ansar to be just in range of Breech-Loading Rifles when they come on the table - hence the terrain -  and for them to have to make at least two full moves to get into contact.

If you're stretched for space just imagine the distance from an edge of the table to the face of a British square unit is 1 meter away (~39 inches), and make the Ansar have to move accordingly.

Force Notes
Unless otherwise specified, units are assumed as listed in Blood on the Nile supplement.

Victory
First side to loose 5 units, Shaken or outright - small units and artillery count as half a unit.
Posted by Jackstorm at 13:48 1 comment: