The latest effort is another Newline Black Powder regiment for the Anglo-Egyptian forces. 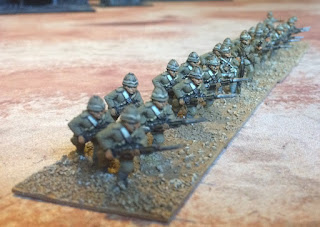 These are from packs SUD01 British Command and  SUD05 British Foot Advancing, bases need a bit of filing but no biggy. 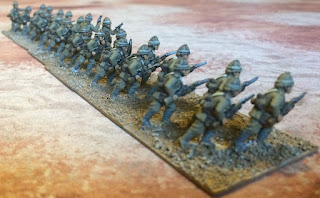 Based on the colour plate on page 72 - 2n Battalion Princess Victoria's Regiment (The Royal Irish Fusiliers) from the book 'Go Strong into the Desert' by  Lt. Col. Mike Snook, a Perry Miniatures publication.

However the unit has in fact come out almost exactly like plate 2. of the English Khaki units in the Perry Miniatures Guide. Such is life. 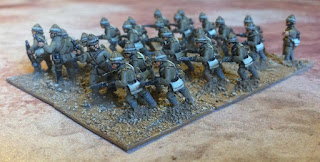 I changed the technique for painting the helmets this time, from the drybrushing used for the NSW Regiment. I detailed the portions of the lemon-squeezer with a much cleaner effect.

These Newline figures really do have a huge amount of character when painted up. Great figures once again and really nice to work with.

I feel the need for some artillery or another highland regiment next.
Posted by Jackstorm at 20:22 No comments:

Look, I know I should grow up and stop playing with toy soldiers, but what an excellent way to start the day.

Was checking some of the links on this blog and flicked over to Newline Designs home page to see that these guys had been finished and were on display on the homepage  (seriously I was like OMG! OMG! OMG!).

I can already see from the pic that the figures are depicted accurately and with superb detail as expected from Newline. The bandoleers are correct and even the goggles have been depicted! The poses are great with just the right amount of drama and look at the options:

Even a quick cross reference to the cover of 'Go Strong into the Desert' produced by Perry Miniatures attests to the accuracy provided by Newline. 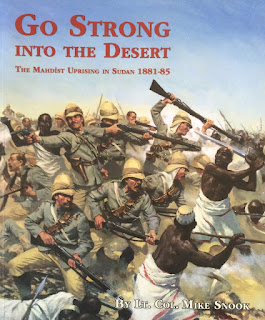 The market (read me) has been waiting for 20mm/1/72 scale dismounted Camel Corp figures since HaT released its Camel Corp offering back in 2008, with only one dismounted figure, kneeling, firing. 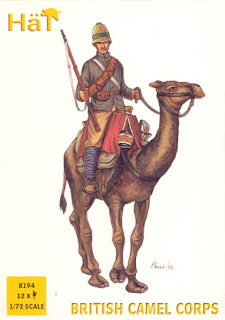 
Now it looks like an excellent Desert Brigade can be made up for my Sudan 1500 Project (was the Sudan 1000 Project, but see that previous post).

For me this is a project 30 years in the making. It was this plate that appeared in Military Modelling back in the Eighties which started the whole thing. 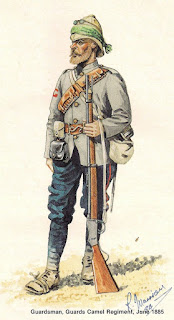 Followed by these plates which appeared in the Army & Navy Modelworld Dec 1984/Jan 1985 edition which sealed my enthusiasm for this period. 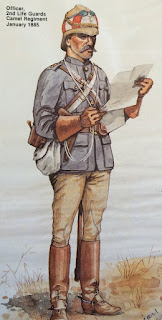 So perhaps the excitement I feel about completing the Camel Corp for my project is understandable, its been a long wait.

Perhaps when its all done, I'll get out more, see people, get a girlfriend, you know the things normal people do... Nah!

Like the previous Tomb King post, these are some old shots of how far I got with painting the Empire army before everyone stopped playing :(

The General and army standard bearer

The ranks await engagement for the coming battle

One day I will finish the full 3000 points awaiting me in their blisters, to go with the 3000 points of undead. Then I'll be able to force people to play, whether they want to or not! Whahahahahaha!
Posted by Jackstorm at 19:28 2 comments:

Here's a quick look at some old pics of my Warmaster: Tomb King army.

The army has grown considerably since these were taken, almost by another third.

It's still an awesome game sixteen years after its first release and clearly the embryo for Hail Caesar and Black Powder. In fact last year it was the game I played the most.

The priests, lets face it, the real rulers of the undead empire!

As with all GW miniatures these are excellently designed, sculpted and produced.

Even the 'cannon fodder' like these ranks of skeleton bowmen are excellent figures for 10mm.

These guys rock, missiles heading in plus bonuses for charging and just for being chariots!

Great sense of movement with these cavalry.

Skullchukkas! When in the field, its customary for the train to chuck screaming skulls into the ranks of the enemy to disorder them.

Or if piercing multiple ranks of infantry is your thing, you can't go past the Bone Throwers!

Terror from the skies with undead carrion.

Ah come on! Its just not the same without the mighty Sphinx!

Or the horror of giant undead scorpions (used as Sphinx)

If I get a game in during the coming months, I'll post some more pics of the rest of the army.
:)
Posted by Jackstorm at 19:16 2 comments:

This blog was originally published at blog.com but had some wee technical issues, so have set it up here- thanks Google!

All posts previous to this one were posted between January and March 2016; obviously they all appear in April because I astutely realised you could set the publishing date on these posts after I had removed them from the old blog site and lost the dates. :)

Anyway enjoy the eye candy and waffle that is Never Enough Marines.

Posted by Jackstorm at 15:41 No comments:

So Tim and I had our final game for a while (back in early March) as he’s moving away. I felt so sorry for him having to move that I let him win… maybe not.
So it was a 3000pts tournament game, Tim Biel Tan, me Air Assault Space Marines, so no surprises there.
Tim had finished some Epic scenery and dumped it on the table, forming a little bazzar in the center. Later on in the game there was a satori regarding the movie Black Hawk Down and the bazzar in that. 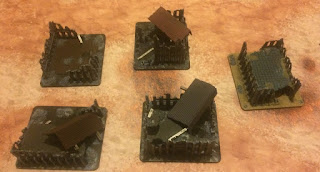 Hence the name of this BR.
Set up occurred with no great surprises.

I set up my SC Tactical formation on my Blitz in a corner (not realising it was no longer my BTS as it was in the 4000pt army I’d been recently playing) and kept the Warlords and Land Speeders close enough to lend a hand if any first turn madness occurred against my Blitz. 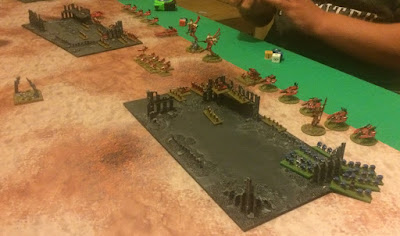 Tim set up in a beautiful symmetrical pattern around his own Blitz, erring on the side of defense should I unleash any first turn madness.
First turn started with teleports on both sides (didn’t realise you put one unit down at a time – meh), and madness was unleashed. 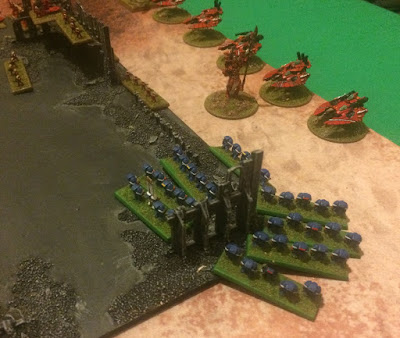 Terminators awaiting the initiative roll.
We rolled for intiative with breath baited, my intention was to come in hard on the first turn and continue rolling up Tim’s force from (my) right to left. Everything depended on the first turn initiative roll; and I lost it.
It was a good game, if a little short, but it pretty much ended there and then for the Marines.
So Tim shoots the Terminators with his Revenants, wiping out the entire captain’s formation, then engages the remaining formation with the Avatar. 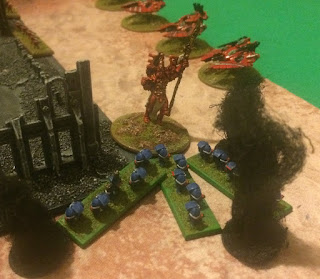 I rolled like a trooper needing '3s' for macro weapon close combat... 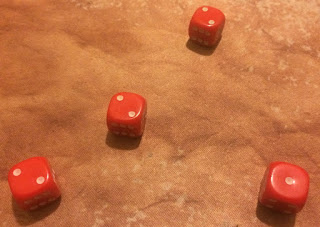 Oh yes I did! Then this happened... 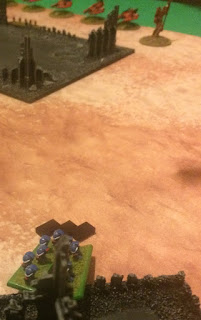 Broken remnants of the Terminators run away into the nearest ruins.
Desperate to do something I broke with my plan and came in on the other side of Tim’s army – why? I have no idea. Will I ever learn? But at least took out his tanks.

Then this happened and I was down a Thunderhawk and two formations of Devestators as well – crikey!

I conceded at the end of turn one as my main offensive units and half my army had been shredded, but Tim has an evil and unsportsmanlike streak and made us play on.
At the beginning of turn two the table looked like this.

Stuff happened and the SMs were being worn down. Tim got my BTS taking out the Warhound pair.
At the beginning of turn three the table looked like this.

Then in the last activation Tim landed an awesome looking Eldar lander and I didn’t get a pic of it! But alas there was a massive assault over my Blitz which destroyed my Supreme Command Tactical formation and gave Tim the Blitz – but only just, as he nearly broke himself in the process.

But it is Epic and that was an epic way to end the last turn of the last game we’ll have for a while. 6-0 to Tim.
I’m not going to whine about the Marines this time (I had already had a wee cry before hand, asking Tim not to bring a developmental list). I was happy facing what Tim put on the table and it seemed a manageable match. If the initiative roll had gone the other way, I’m pretty sure it would have been a close game. Them’s the dice.
One of the things I should have have spent a bit more thought on was forming the army list. I’d just taken a 4000pt list and sliced bits off to make a 3000pt list. Not a good idea, all sorts of things happen, like only having three formations on the table in the first turn. Like the BTS switching to an offensive formation – the Warhounds.
But this speaks volumes about resilience.

This was the only SM unit left on the board. A loan Terminator which had sucked up at least 7 activations as Tim tried to destroy it outright; from turn one no less. I feel a Terminator list coming on.
I’ll miss you Tim. Be safe out there on the roads!
Posted by Jackstorm at 15:29 No comments: