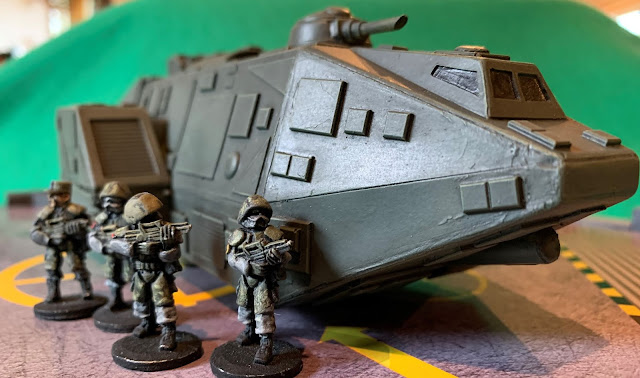 I answered, yes, but reminded him that blokes with shooty weapons would likely shoot Spiney and he may not win. I was trying to avoid the tears of disappointment when Mr 'Favourite Dinosaur at the Moment' was taken off the board; but it seems I jinxed my janx.

The first challenge was to make an element for him for the new game. He needed to be tough but not so tough he couldn't go down. That required a new special rule called 'Large Beast' with basically up to five small arms penetrations causing 'one' penetration.

I used the 'small' Spinosaurus stats for 25mm and the large stats for 15mm. First up, a couple of Federal Stats Europa (FSE) squads of GZG 25mm 'volunteered' for the test.

"What, you lookin at? We's just standing here waiting... what was that noise?"
I initially put the Resilience too high for Spiney and realised small arms couldn't penetrate him, but quickly rectified the situation.

It didn't really matter as Monty Stormed the squadies and despite concentrated fire, Spiney had dinner. 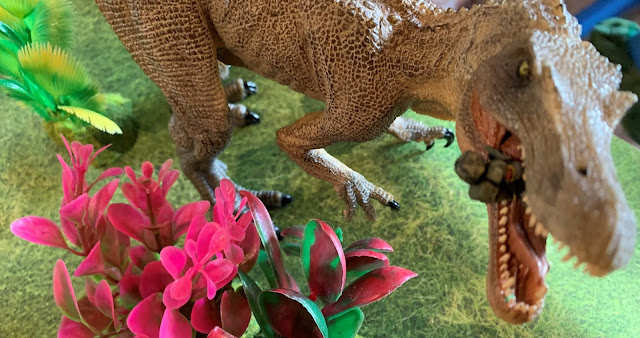 Next up I tried balancing the points on both sides to get three FSE squads, two with AT weapons...

... Monty thought this was so awesome, he put his second favourite dinosaur, 'Jaw', on the board too 😂.

And both Stormed the troops before they had a chance to move.

That's a lot of teeth!
It ended badly for the FSE and even Jaw got some dinner.

Then it was Scale Test time, re-tuning for 15mm - only multi-shot weapons needed adjusting. This time the only sci fi 15mm I had painted got put in the front line, a platoon of GZG's New Israeli.

To be fair, I wasn't really trying to 'win' per se - honest - but I noted with balanced points the dinos did start to get worn down in an 'enjoyable' way.

If I'd actually moved the troops and set up firing lanes, etc, instead of trying to make Monty giggle all the time, the elements would have worked really well. (BTW this is pretty much 'to scale' for a full-sized Spinosaurus. Maybe closer to 20mm.)

All in all, a great laugh and a successful trial for Dinosaurs.
Will make a great army list supplement, but might add a 'Driven Off' rule to the Large Beast rule, whereby after taking half the damage points the Gargantuan rule allows, the dino runs off. Oh, and also a Stampede rule for herbivores... and a poison rule... and a Team Work rule for smart dinos...
Posted by Jackstorm at 10:53 No comments:

Still getting terrain together to start playtesting the new Sci Fi game and I'd always wanted some exterior walls for the Battle System terrain I got many years ago.

I couldn't find any on the site and emailed to see if they were still available. Unfortunately my set is pretty old and not really 'supported' in current range. But I have to say Wayne from Battle Systems was awesome.

He sent me the links to the old DLC files and from them I was able to retro-engineer some walls and gateways. Just excellent service from these guys.

I tried to be careful in the design as I wanted to use these with 15mm and 25/28mm. Think they came out OK, made from card, printed at the local printer.

At 15mm, with the external walls in, the Battle Systems stuff looks like awesome hangers.

And the vehicles fit in without any scale problems.

For 25mm, more of the Battle Systems interior goodies can be used.

And a couple of (ex-GZG, Wombat) Daemonscape Hover APCs also make fitting additions inside the interior.

And a heavy hover tank to boot, inside the vehicle bay, awaiting a final spraying of paint.

Mostly happy with how the walls came out, some of the gates didn't quite fit together as expected, but should make for a lot more interesting gaming.

Posted by Jackstorm at 14:14 No comments:

During lock-down, which seems so long ago now, I decided to publish the Sci Fi rules I'd been working on for the last five years.

Having wrangled and re-wrangled the rules into some frame of playability, I realised it was time to move into some more serious testing.

Wanting to make things fun for those players who would give up their time to help nail down the finer details by playing, I decided to rummage through the Sci Fi boxes and finish some terrain.

So first came out the plethora, yes plethora, of tropical fish tank plants and they got a good basing and bit of paint. Then I started on some bunkers.

Pretty sure these were purchased from Dameonscape or GZG, not sure now as I can't find them on the Internet. But they all got a serious drybrushing and some signs, printed at the local printer. 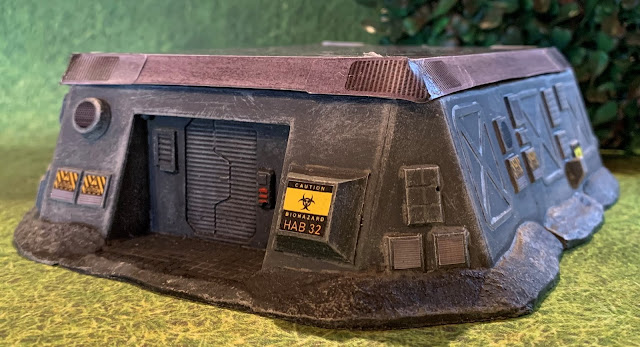 There's three all up with a connector-thingy for two of them.

They're a modular build so you can extend and join as you like, but after photoing them, I'm pretty sure they gonna get glued as the parts keep on moving when in use.

They came with resin roofs but they were a bit too busy for my liking so I made roofs from card, printed at the local printer.

They're originally made for 25/28mm and as I have no 15mm terrain at present, I built some add-on parts to scale the bunkers down.... using card, printed at the local printer.

Then I got the madness and built some crates and displays for internal details, also from card, printed at the local printer.

I made interior floors using the same technique which finishes the bunkers nicely.

The boxes/crates came together pretty quickly and the commons on the internet made for some interesting finds for private use.

The local printer was good value as my home printer doesn't print card and the colour from their printers is so much brighter and more solid.

Then the perimeter wall got some brief attention with some grey paint, think these came from a bloke in Australia

Along with these awesome landing pads, which got some landing details and ramps for smaller scales, made from card, printed at... you know where

The fish tank plants take some 'suspension of belief' but really make for an excellent jungle planet.

Where you running to? To register for Beta testing for the Universal Science Fiction Gaming System!
Posted by Jackstorm at 15:58 2 comments: