It had rained for three days solid, making maneuvers and communications absolute hell.
Washington had lost sight of the enemy and his other brigade, and unbeknownst to him, Howe had not faired any better.
Having camped overnight off the roads and tracks that surrounded the area, the early morning pickets on both sides announced the enemy at brigade strength within cannon range...

Last week, Mark came around for my first game in over two years and our first game of BP in nearly that long. We decided to break out my 20mm AWI as they had yet to see action on a board.

Using the BP supplement Rebellion!, I'd come up with a scenario which was intended to represent the maneuver and communication of this conflict, and to include the important role of cavalry - finding the enemy and friendly brigades during maneuvers.

The sides were pretty evenly matched, two brigades of a core of four standard infantry units, supported by light infantry and cavalry and one artillery piece per brigade.

The board is split up into eight 60cm x 60cm squares and littered with terrain as looks ascetically pleasing. For us that was a liberal splattering of forest and a few low hills.

Next, each side chooses a square to place their first brigade and as Mark had driven 40km to get to my place, I let him go first. The starting positions for Howe and Washington were as follows.

Then each side numbers the remaining six squares, rolls a dice and places their 2nd brigade in the square represented by the dice throw. Should the person going second land in the same place as their opponent's 2nd brigade, they shift one square away. Our second brigades were positioned thusly.

Providing the starting positions for the battle - and looking at the diagrams, I asked myself why did I move my second brigade????

I let Mark start and the first thing we saw was a mass of Germans coming through the forest, coming directly towards my second brigade.

Everything was in range and a bitter exchange of fire began between the Germans and my second brigade, which lasted all game. This resulted in an early casualty from my brigade but I had reinforced its rear with light troops. 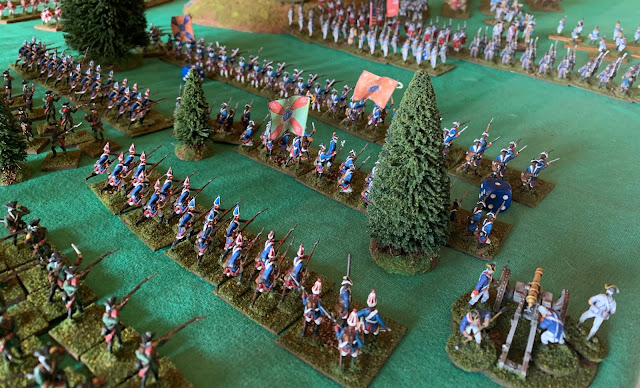 The British and Washington's brigades began their approach and I became acutely aware of the dog leg that had appeared when deploying.

Mark had ceased the opportunity to head straight towards the flank of second brigade... and into its cannon...

No Marks for guessing what happened to the cannon next and I rushed forward the 3rd New York as a sacrificial move to stop the flanking maneuver from destroying my second brigade.

Fire continued and around half way through the game, the dispositions had not really changed, with Mark's Germans taking and giving fire with my second brigade, while Washington and Howe fought it out on the hill behind. 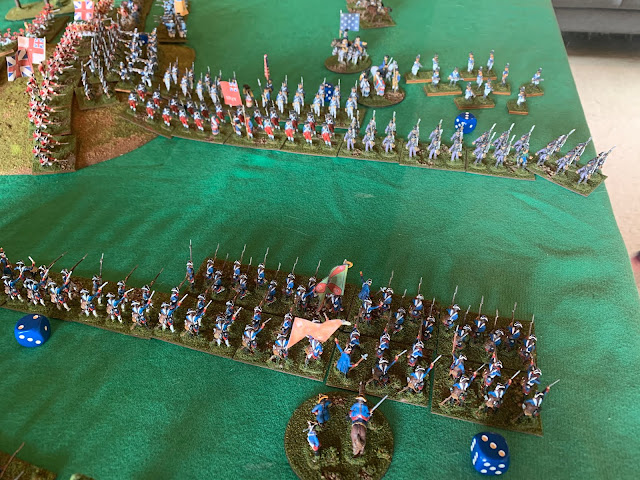 At one point I tired flanking Mark and repelled his 17th Dragoons, and this looked to be the successful first step to rolling up Howe's brigade. 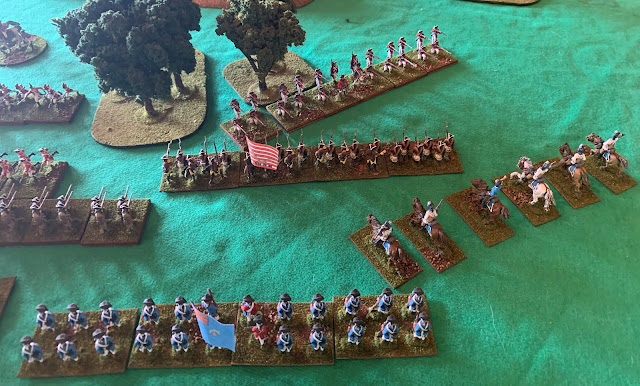 As the center held but shook the 1st Maryland to its core, forcing it to retire to the rear. 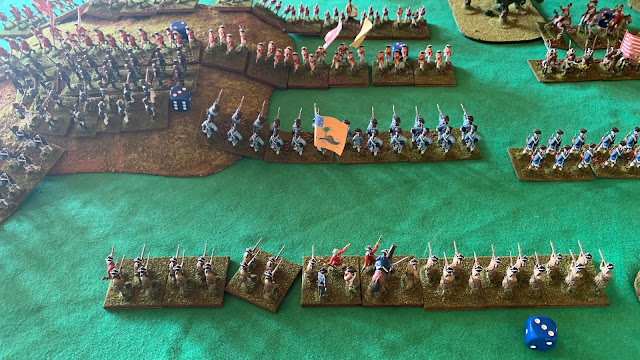 Meanwhile, on the hill, the New York held firm... which puzzled us as it was only a small unit and should have collapsed early on. The answer was I treated it as a standard unit with 3 Stamina - oops.

The Brits also took some serious pounding which also pushed them back...

But then, this happened...

The outflankers were themselves, outflanked, which had a strange outcome of a flanked unit destroying the flanking unit - and Sherborne's Additional Battalion standing proud at the end of it.

The Jagers finally found their feet from behind the German lines and came rushing over the hill.

Then it was a matter of attrition and with the British still swarming over the hill and the Germans still plowing away after also losing some units, my second brigade broke (think it had broken ages ago by the numbers of destroyed and shaken units, but we forgot we needed to check).

The day undoubtedly went to the Germans and cool heads of the British.

A good game in which we forgot the majority of Shaken and Disordered rules and nevertheless had an enjoyable time. This included drawing up a table for figuring out the weather and whether or not cannon balls should bounce for the scenario. Only to remember bouncing cannon balls was a Warmaster rule :)

Posted by Jackstorm at 14:19 No comments: