Finished off the other unit that's been on my painting table since April, a regiment of the Gordon Highlanders for Black Powder Sudan.

All the troopers are from HaT's Set 8202 Colonial Highlanders with command figures from Newline Design's Colonial Zulu Range - British Command in Glengarry.

For the troopers the preparation was minimal with a small amount of flashing to do and the command figures needed only a little filing.

There is a decent amount of detail on the figures to pick out. 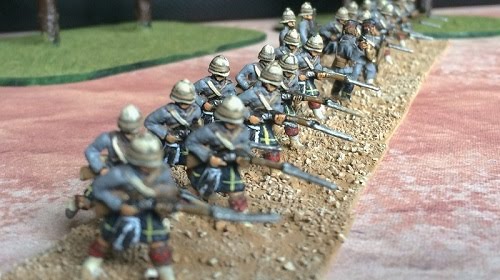 All in all I think I spent around twice the amount of time and effort on the figures compared to regular British units, considering the kilts (super fiddly at this scale) and the sock-thingies. 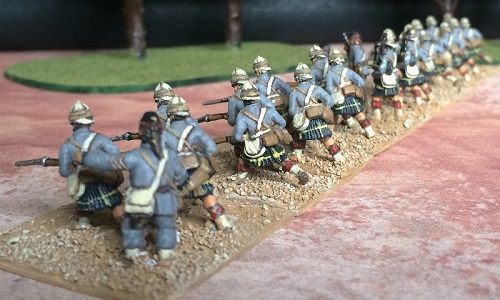 But am happy with the end result even if some of the kilts are a bit wobbly.

The regiment is a Standard sized BP unit of 24 figures on six 4x4 bases.

And takes it place along side the Camerons as Scotland's contribution to my Anglo-Egyptian forces.

Along with the Gardner Gun and support finished recently, I think that's 1000 figures reached for the collection. Maybe its time to get a girlfriend... nah, I haven't even started on the Camel Corps!
Posted by Jackstorm at 11:42 3 comments:

So Nick came out for a game again and asked if we could give Warmaster Ancients a go.

He'd prepared a couple of lists using Britons and Romans, and brought all the figures, so we set the table up and off we went.

Right flank to Left flank I massed a brigade of warband on the right.

Another in the right centre.

Fanatics in the centre with their general, fighting naked - as only great warriors do. 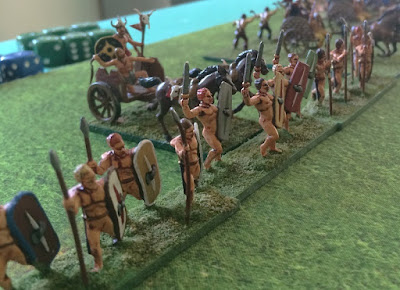 And the lights holding the left in the morning mist (a.k.a overexposure).

Facing off, left flank to right flank were some lights.

The legion in the centre.

Some veterans and warband on the left centre.

And the light and heavy cavalry on the far left.

Early Phases (a.k.a. I'd forgotten how to play and thought my chariots were like Tomb King chariots

Off went my warband on the right flank singing "if I only could... I'd go running up that hill, with no problem' - yay! 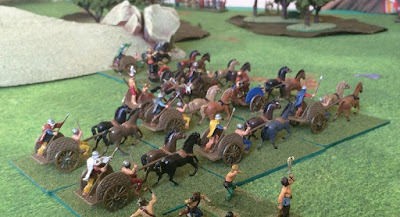 And everything else failed to activate.

Nick brought up his left flank.

'If you go down in the woods today...' His veterans and companions went for a walk in the woods.

And his cavalry and general swept forward also.

My light cavalry dominated the hill in front of them. 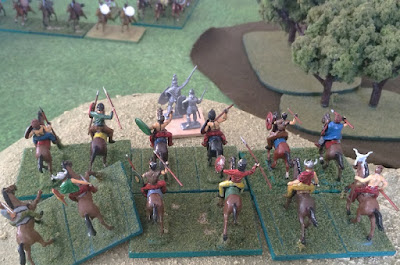 The chariots went forward to close the gap, there were two steep sided hills with cliffs dividing the centre with a five base wide gap between them.

... before some shooting drove back Nick's cavalry - we thought off the edge of the board but some magic rule prevented it.

OK it was now that I realised that my army had no armour and the chariots were light, this called for a redeployment  to reinforce the left flank and some delaying tactics in the next few rounds while I figured out what to do. 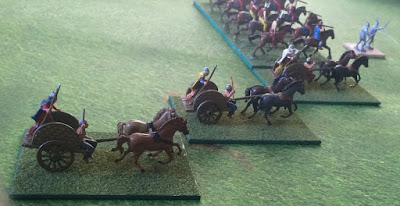 So I pulled back and sent the fanatics towards the Roman veterans to buy some time.

Finishing with a sprint on my right flank which got that warband across the board and behind some woods.

And the first real clash happened with me sacrificing the fanatics.

In the meantime Nick broke up his legion which is what I was hoping was going to happen.

And moved his flank troops into the woods. 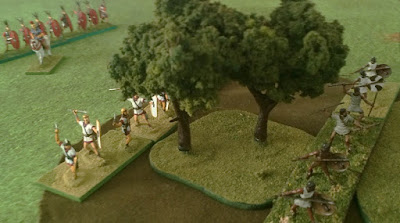 But he pushed forward on my left flank with his cavalry and general.

Occupying the hill I'd abandoned when realising I needed to regroup.

As expected the fanatics got pummeled for several rounds...

... only it didn't as I drove back Nick's cavalry with closing fire. 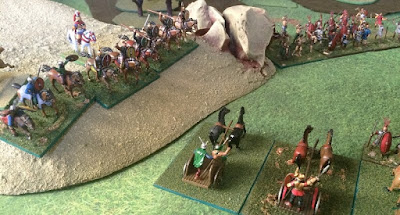 Which ended well for the Brits after several rounds of combat. 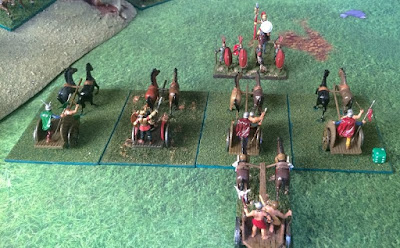 OK so this is when I realised that the shooting in Warmaster Ancients is much better than Warmaster. 2 shots per stand as opposed to one, even if range for skirmishers is pants - 15cm. So I started shooting everything I could with everything I had.

I pushed Nick's cavalry and his general over the cliffs with drive backs (that's his hand about to remove the figures).

Which started clearing the centre. 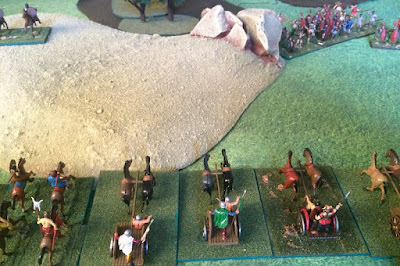 And the left flank.

And Nick reformed and moved up his centre.

Then I got the blood lust :) and in went the warbands - first at the hill in the centre right.

Shot from Nick's side of the hill.

And into his lights in the woods on the right flank.

And two units into his lonesome legion at the back.

I kept up the shooting causing casualties, disrupting his veterans and driving back their warband companions. 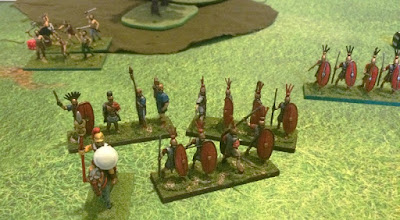 A warband smashed through the lights in the woods after several pursuits and headed for the Spanish lights next. 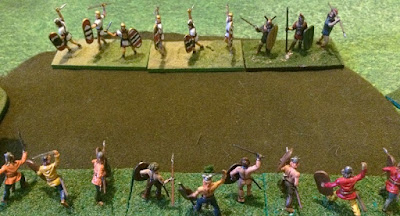 Then the combat with the legion began and went well after the first round of combat.

And after continued pursuit...

The legion was destroyed.

... and he graciously conceded, knowing that once the blood lust of the Brits is peaked, there is normally no stopping them - oh Boudica how great and pretty thou were!

Cool game and pays to a) remember the rules, b) understand what your army is made up of :)

Here's some gratuitous shots of my Carthaginian and Roman commands from Newline.

The Roman general from the high command set. 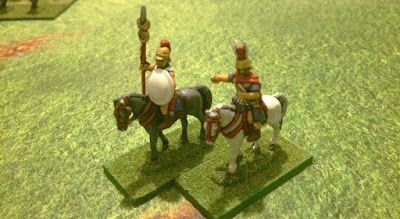