Had several great games of 15mm ADLG over the weekend using my Seleucids, which started well with a (supported) win against Tim's Republican Romans on Friday night and ended abysmally with three defeats against Mark's Classical Indians.

I forgot to snap shots of most of the games and most of the photos came out blurry, but I did get a single shot of some of Mark's awesome Indians and Tim's Republicans can be seen in a previous post.

My army stayed the same throughout the weekend in a basic configuration, 4 x Heavy Cavalry and LH support in one command, 6 x Pike including Argyraspides in another, and 3 x Elephants with Asiatic bow support.

Friday night's game had only several rules for me, keep the elephants out of the rough, slam into something with the cavalry, and keep going forward with the pike. Having followed these rules (which is no small thing in itself for me), Tim then assisted with the tactical advice needed to help the Seleucids win. They smashed the Roman cavalry and rolled well against the Roman legion.

Sunday's defeats could be put down to terrain but Mark better maximised the placement and its use, keeping the Indian bow and mixed units (melee as Mediocre Medium Swordsmen) and elite elephants mostly in fields and on hills. 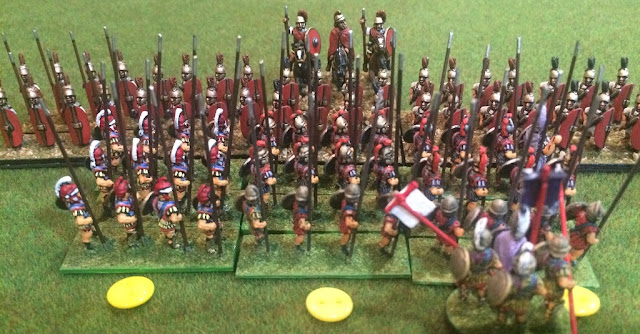 I was too tentative moving into contact, as Mark pointed out, although fighting at -2 in the rough, the pike have greater endurance (essentially four hits), and I didn't really place terrain with consideration of the army I was facing - actually choosing 3 - 4 pieces of terrain to the Indian's advantage.

In a third game we swapped armies and I did not roll well with terrain, with most of it ending up on the Seleucid side, so all the Indians ended up in the open, but ultimately Mark used the Seleucid army to its fullest, flanking me with the cavalry and rolling forward with pike and elephants in a glorious wall of steel and ivory.

Which leads me to late Sunday afternoon. It was warm and sunny when I got home and I got all inspired like. The bases for the 28mm ALDG projects had arrived earlier in the week and I got 'the fever' and started making inroads on re-basing the 28mm Rommano-British.

So here's a couple of sneak preview shots of the heavy spear painted by Dragon in Hong Kong.

The Gripping Beast figures look ten times better on ADLG 60x40 basing than they did on individual 20x20 bases, I think its going to be a good looking ALDG army.

So with more contracts rapidly approaching, I've continued this sprint to get things finished to host a Black Powder: Rebellion! game.

With Lee's dragoons finished in the last post, its enough troops to field around 12 units for the Americans (counting small units as 'half'), so time to get some brigade commands done.

So not doing anything by halves, and introducing a new 20mm figure line for this blog, first up is B and B Miniatures American Staff Command Mounted (AR79), painted as no other than Washington himself and including a sword conversion to provide his headquarters' standard-bearer.

The figures are well detailed if a little small compared to the Italeri stuff but fill the gap in the plastics market well (with an extensive range of 20mm AWI figures BTW). When I first got them they looked bad to be fair, but this was only because none of the sprew flashing from molding had been removed. But lo and behold, after only a couple of minutes with a file, they were prepped and I realised that the were well molded and had hardly any mold lines at all, once the sprew flash had been (quickly) removed - nice.

Which brings us to the first brigade command and for this one, I've tied it to one of the completed 'territorial' brigades, New England.

The figures are from the Italeri 6060 American Infantry set and a mounted officer from HaT Set 8282 7YW, Prussian Infantry Command, posed as drummers pulled in from the regiments and pooled together to give brigade orders - so quite a 'low level' brigade command - meh, "...they sure are prudy".

The drum detail comes up well for 20mm, that pale ugly thing on the left is my thumb for scale comparison :).

To end with the final and more generic command from the IMEX Set 511 George Washington's Army, including the mounted officer and dragoon, and some distinguished looking chap/officer in all his finery, having a chat to the commander.

I was a bit worried about using these mounted troops as in the PSR review and on the sprew, they look kinda staid and overly 'posed', but no, they paint up well.

So here's a couple of shots of the finished brigades, starting with Maryland/Virginia.

And the New England brigade.

Note "Mount Napping Cat' in the background, so called because of its vague resemblance to a sleeping cat, remarkable geology.

To be honest it hasn't hit me that they're finally finished, but on the final leg now. Time to finish off the Brits: command, 17th Light Dragoons, and artillery crewmen.

PS: 3rd Virginia is actually missing in photos above. 2nd New Hampshire seems to have turned up in both brigades! Here's a link to 3rd Virginia.
Posted by Jackstorm at 15:28 No comments:

This is it, the last unit for the Maryland/Virginia brigade, only three commands left to do and will soon be able to hold a BP game (...after also completing a unit of 17th Light Dragoons, some artillery crews and command for the Brits), but definitely getting there :).

These guys are again from Strelets Set 119 British Cavalry (Egypt) and Set M071 British Light Infantry in Egypt - with only minor alterations for the period, mentioned in the Lee's Legion post. I think its taken the four units of these Strelets figures to actually get my head around how to paint them as the molded detail is deep and my flash removal not so 'flash', leaving the soft plastic with peaks/rough patches.

The legion was issued green and buff cloth and are commonly depicted with green jackets and buff breeches, but I have painted them as per Rebellion! supplement in buff with green facings.

The single reason for this is that there is a unit of Tarleton's horse and foot coming up for the Brits, dressed and outfitted the same as Lee's troops, in green jackets, and although it would be 'cool' to have them confused on the wargames table - as actually happened during the AWI - I reckon this would only be 'cool' once, then would quickly become confusing and annoying, "...but I thought they were my troops...?"

So that's it for units, next up three American command bases.
Posted by Jackstorm at 11:35 No comments:

Another small unit down, this time on the side of the Brits, some reinforcements for Mirbach's Hessian brigade completed almost a year ago; some mounted Jaegers/light troops.

The figures are actually from Revell's Set 02573 Austrian Dragoons but at this scale I cannot spot any difference between these guys and their German counterparts.

The uniform is painted up simply from a search on the net and without any reference material, other than knowing that dismounted they wore green coats with red or crimson facings, with green or buff waste-coats and breeches.

These guys are based as a small BP unit for the mounted infantry option in the BP supplement, for one of the Jaeger units painted previously.

More auxiliary units in the feverish attempt to actually get enough figures painted for a game of AWI Black Powder; some more crews for the large train of cannon painted previously.

These are the same IMEX figures as the 3rd Continental Crew painted earlier this year, but painted as Virginia continentals, as per the reference in the AWI Black Powder supplement; blue coats with red facings, waste-coats and trousers.

I like how these guys came out, even though I had to paint some of the strapping on, and the red outfits certainly go well with the barn red cannon... they should make a nice target on the table.

So that's more than enough cannoneers for a couple of brigades, its almost time to start thinking about the brits.

Forwards!
Posted by Jackstorm at 09:28 3 comments:

Its been a long time since I rock'n'rolled, or painted figures for that matter, but a freakish mix of small, fragged, contracts, interspersed with small windows of spare time, has given me a chance to start catching up - back in April I said I'd get a couple of AWI Black Powder brigades, for both sides, finished by June. Hmmm... its September...

First off the table this month is some more of the smaller, auxiliary units, and here its the 3rd Continental Dragoons, mounted and foot.

These are from the Strelets Set 119 British Cavalry (Egypt) and Set M071 British Light Infantry in Egypt, with uniform fairly close (close enough at this scale anyway) for AWI dragoons and light troops - with only minor alterations mentioned in the Lee's Legion post.

The uniform is contemporary from a picture on the net with reference to the Black Powder: Rebellion! supplement, white jacket with light blue/blue facings, and buff breeches.

Although these guys wore a leather helmet, it is possible some or all eventually ended up wearing the 'Tarleton' helmet, so the Strelets figures serve just as well.

Continuing on with the theme of support troops, these are based as a small BP cavalry unit and a small light infantry (foot dragoons) unit; or can be fielded as a single cavalry unit that can dismount.