... or pretty much, what I did during New Zealand's second COVID lockdown.

So the goal was to do something with the hordes of 20mm figures that had been replaced by newer sculpts and companies and recklessly stuffed in a box, and had come home from far to many Bring and Buys.

The second goal was to find a game and a way to teach my stepson about losing during a game, especially your 'favourite' figure of the day.

The result was a Black Powder supplement - greatly simplified with the addition of heroes, magic, monsters and machines, desert scenery and the desert forces themselves - which were meant to be reinforced by Redbox's Dark Alliance Mummies and Anubis army, which have as yet, failed to show up from muster - international shipping being what it is. 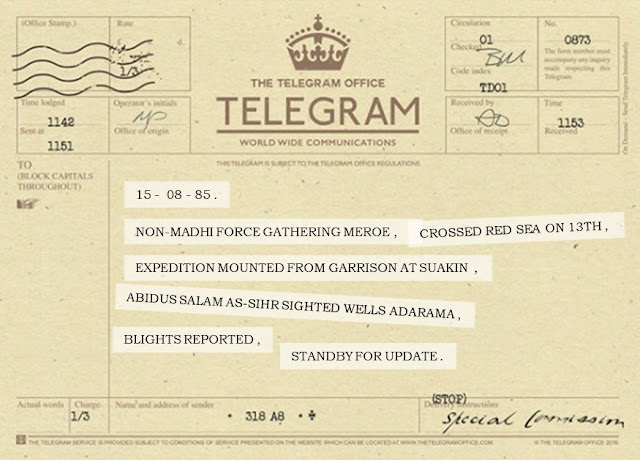 I grabbed Hordes of the Things, Warmaster Revolution and Black Powder V2 and munged the first two into the third. What resulted was an exceptionally fun, and funny, not to be taken seriously supplement which worked really well - with very little rule changes for core BP rules.

We had hordes, steam tanks, Giger-moths, stoic British infantry, and crazy magicians firing off their fizzing silliness all over the place. Instead of trying to 'win' the object was to tell the 'story' and not mind which side you were on or who won - I guess teaching how to lose before teaching how to win - sounds counterintuitive I know, but I don't think we've laughed so much in ages.

Building upon previous desert escapades, we updated the Temple of Seth with a couple of extensions. 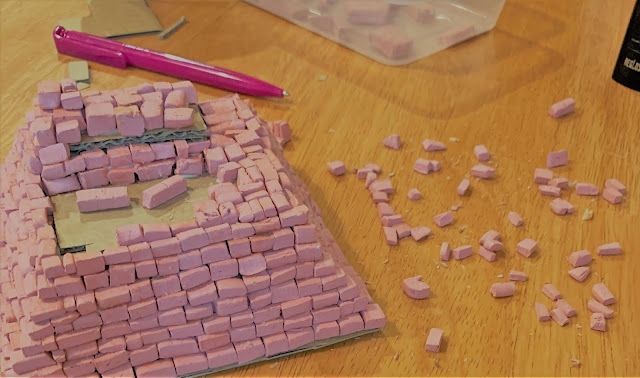 Ten hours later and we have a small pyramid, which I have to admit, set the scene nicely, even for the pyramids in northern Sudan (who knew they had them???)

And of course you have to have an abandoned fort and a hastily erected stone defence robbed from said pyramid (see the 'good guy' photos for the stone defence).

The bad guys, in a homage to Indiana Jones baddies, red and black theme and warriors from the Esci Set 238 Muslim Warriors and Italeri Set 6010 Saracen Warriors, flying horrors from Eagle Games Egyptian 'Age of Mythology' sprue, and a giant Djinn from the 25mm Ral Partha range.
Led by a great As-Sihr (magician) and hell bent on reaching the pyramid cemetery at Meroe to raise the dead and basically do 'bad things'.

Classic hordes of bad guys for your chosen heroes to fight, backed by a mighty Djinn hero.

The red and black certainly put colour on the board and the forces were finished off by further Eagle Games Egyptian sculpts of various monsters - used in a summoning/charm spell during the shooting round. 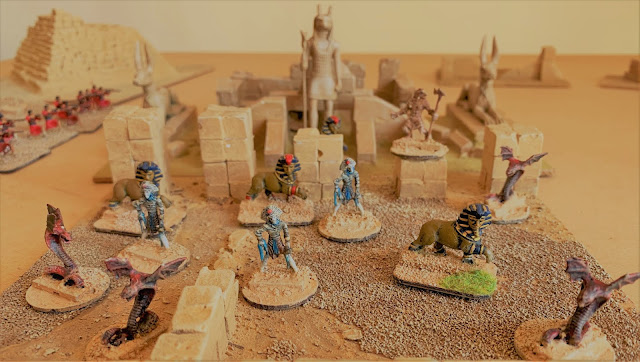 A lot of these were re-based from various HoTT forces and further photos can be found here.

Including a regiment ordered to wear their red coats - one last time - to show the As-Sihr forces they were just as 'red' blooded as they were.

Inspired, many of the KRRC donned their old dark green for the coming battle.

The rest of the forces wore their new khaki smocks.

The special brigade (the only one with red epaulets) were led by their general.

Even a regimental chaplain volunteered to meet the As-Sihr and all their magical fizzing silliness, quoting "This maniacal fuddery-duddery just won't do!" - essentially a 'magician' that uses the Dwarven 'dispel magic' spell from Warmaster,

Envigoured by their comrades, the Camel Regiment joined in also, ditching their camels for local ponies - Italeri converted confederate cavalry.

Dismounted, the Camel Regiment loved to blow their own horn - Esci conversions.

Lost in the desert, a Major and his colleagues struggle on.

Some gas-powered Giger-moths for scouting and machine gun action.

A hero in a steam-driven armoured car joined the fray.

Along with a steam-driven tank (converted from Emhar, I think)

Worried by the rate at which the As-Sihr forces were drawing supporters from across the northern Sudan, the British dispatched reinforcements from India in the form of some Sepoys and cavalry. Drawn from the same Esci set above and Strelets Set 057 Bengal Lancers.

The general and some light foot troops.

A full regiment of Sepoys was a welcome sight given what faced the force at the Meroe pyramid cemetery.

As fierce as any British soldier.

Drawn from all over India.

The Indian 'lights' were a welcome addition for scouting and flank duties.

The Mahdi's and Local Forces

Forces to make up the numbers on either side, depending on who they choose to support.

A company of 'imports' from the Northern Frontier.

So, having reused many very old bits and pieces, some most excellent adventures were had in the northern Sudanese desert. I might cobble together the additional rules for the future and wasn't really surprised that the magic from Warmaster fit right in to Black Powder given the lineage of these rulesets.

The heroes, machines and monsters required an adjustment of thinking for unit sizes (We only used Small and Tiny units for 'company-level' units), but all in all a completely unexpected success and now these figures can be used by a subsequent generation - as well as this one :)

Posted by Jackstorm at 11:47 No comments: