What does, 2 new horses, permanent employment with weekly travel, 2 house moves, and a new partner with munchkin in tow equal? Absent Without Leave from wargames and blogging for nearly two years!

And, it's only been 18 years since I started painting my Empire Warmaster army, but I have just completed another, entire single unit: Games Workshop's Empire Helberdiers.

This also completes the first full brigade of halberdiers for the army, of which 3000 points worth were purchased and nearly 1000 points worth have been painted. Extrapolating (because we can), this means the army will be finished some time between 2058, or at one unit per eighteen years,  2559... hmmmm.

I went for the additional skirmisher stands for the first brigade, although not sure anyone ever used them.

There is however, an amazing amount of detail on them as there is on the halberdiers themselves

I was nonplused by the time I'd mostly finished the unit and left for eight months requiring shields and flocking to be completed. But once the unit came together with the other completed units, I was happy with the result. 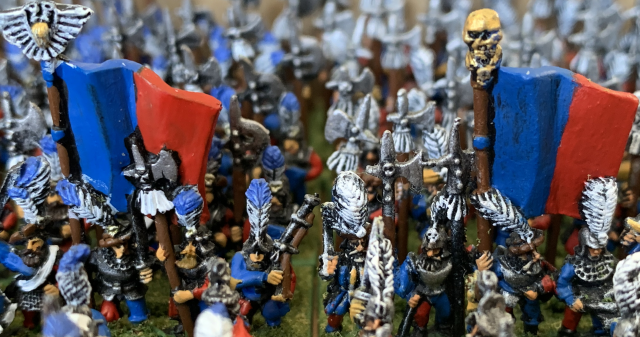 Not bad for 10mm figures at all and with an entire brigade finished, maybe its time to actually crack out another few units to complete a 1000 points.