Finally, after almost a year of living in a tiny cottage with most of our stuff in storage, we have moved and I have access to my figure mountain of shame.
And this is one of my more crazy ideas, recycling the 20mm/1/72 figures painted around the turn of the century, for a game system I've never used; Hail Caesar.
Originally for DBA, then DBM (and DBMM), then WAB, I've taken the Carts and Romans painted up for those games and started rebasing them, sometimes adding to their numbers by a factor of two. I figured, I liked Black Powder, Warmaster, and WAB, so why not give this a go... completely basing to a new standard and building the collection to nearly 500 figures... and I was trying to move away from the scale!
Both the Hastati and Velites are from the HaT set 8018, Republican Romans Hastati & Velites. Command figures are from the HaT set 8051, Roman Command. The signifier is from the HaT set 8035, Roman Catapults (even now I wonder why the Hastati and Velites in this set are 25mm).
But have to say I like the way they are based now and of all the basing standards, Hail Caesar really gives the 'impression of a unit'. 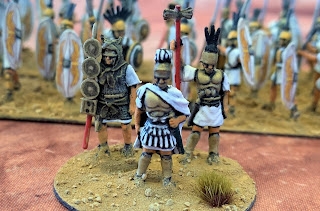 One of three commands, painted as a commander of one of the main troop types for the army (Hastati, Principes, Triarii). Although they'll probably end up being the generals for a single legion.

I bought a pack of plastic gems at the local 2-dollar shop and glued them on the Signifer's pole (ooh err... um, I think its called an aquila), then hand painted the details including the little 'H' 😆

These guys have finally come up as I'd originally imagined. The shield designs are from Little Big Men Studios Range, specifically designed for the HaT figures. They're a little bit fiddly but are excellent and well worth it. It only took one or two figures before the 'product line' kicked in.

I've gone for the tenth and thirteenth legions, a) because the 13th was Scipio's legion and b) because there were a lot of 'pig' insignia available for the 10th - though I'm not sure they fought the Carts.

Along with the LBM transfers, I got some transfers made for the command figures.

Two of about eight small light infantry units for the Romans.

Basing all the lights individually seemed like a good idea at the time, but am questioning that choice after only two units. Luckily a mate gave me a whole lot of movement trays 👍
Next up, the Cart's elephants and a veteran spear unit, and maybe some Etruscan Hastati and Principes.
Posted by Jackstorm at 21:14 No comments:

With things available and readily at hand in our new place, I've been able to crank out some more units for the AWI collection, and snap some shots of the grenadiers I finished months ago.

A suitably heroic unit rushing towards their freedom, 1776 pattern star spangled banner fluttering in the breeze.
These are from the Italeri set 6060, American Infantry box of awesomeness, one of four units left to do using these figures. I used the Uniforms of the American Revolution as a reference and it matched the Rebellion! supplement, so I though why not. The flag is once again from Warflag.com but printed at the local printer with better results than my home printer.
I've even used the single 'overly heroic' pose in the box (which you get three of in each box), even though I swore I'd never use it.

I'd swear, even after being wounded in the head, he's yelling "For freedom!" but then that would be mixing up Mel Gibson movies. But another standard unit for Black Powder: Rebellion! down.

Next up a small unit (16-odd figures) to bolster the numbers of the rebel ranks. Technically painted as the 4th Connecticut but the 2nd's flag. Not sure where the flag came from. I did a Google search on flags AWI, found it and shrunk it down to 1/72 size. I think its was someone's store... but printed at the local printer... 😨

These are actually from the IMEX set 512, British Redcoats, but having finished all the redcoats I wanted, with some snipping of bayonets, they've come up well. Again the uniform is from Uniforms of the American Revolution.

Finished these guys ages ago but they got stuffed in a box ready for moving. They're B n B Miniatures grenadiers and really like how they've turned out. Painted up as companies of grenadiers combined from other units, to make one big (standard) grenadier unit.
I um'd and ahh'd about which grenadiers to use and even bought Irregular Miniatures ones to begin with, but, although they were awesome figures, they were also awesomely accurate to scale - so way smaller than even the IMEX figures.
So I bought the B n B ones and they stack up well against everything else in the collection.
Next up, Tarleton's light horse is on the painting table (now I actually have a painting table again) - and my mate Spiro is finishing off Lot 4 of the commission he took on last year.

Posted by Jackstorm at 20:41 No comments: