Finally got the Gaslands stuff out of the storage boxes and realise its been over a year since I started some cars and got the rules. Determined to actually have a game I decided to finish off the track I'd bought and get some more cars sorted. 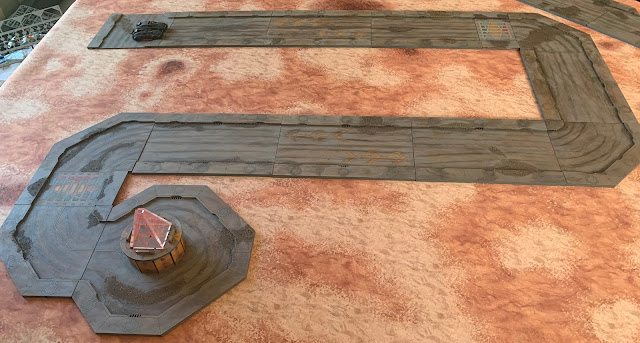 The track is from BattleKiwi and although is under their 28mm - 32mm Alpha City line, is the perfect size for the HotWheels cars. I bought the Road Runner bundle set and some extras, and had a bit of a panic half way through finishing it as it looked terrible. Have tried rescuing it with dry-brushing and shading.

Happy with the 'dirty' look for Gaslands but you can see how pristine a finish can be done with it following the link above. The individual plates lock in to each other and allow the track to be configured for all sorts of requirements, from race track to urban/road setting.

More Cars for the Carnage

Also bit of a sucker for stereotypes and decided to go for some Fury Road style cars.
These two were a couple bucks each and are both HotWheels, '69 Copo Camaro (left) and Mod Rod (right). 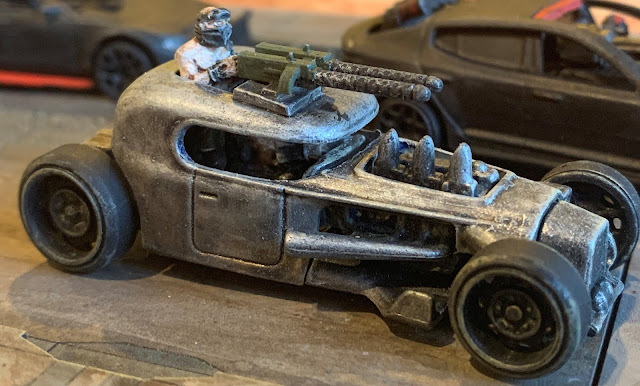 The Mod Rod came up well with the addition of North Star's Implements of Carnage and figures, and nothing really needed to be done but to disassemble, carve out room for the figures, reassemble and paint. 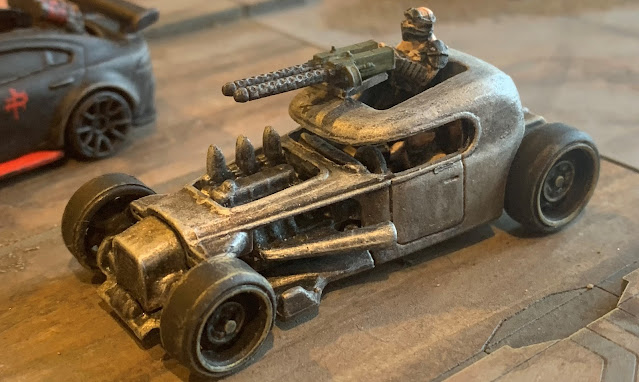 Has a good stance on the board and looks suitably aggressive with twin machine guns, fixed forward.

The Camaro was also an easy build with the addition of a massive supercharge intake and also twin machine guns, fixed forward. Although I filed the roof away at the back to allow the guns to seem like they'd been properly fixed.

They've got amazing detail - which my photos don't really do justice.

Now to have a game and let the carnage commence!

Email ThisBlogThis!Share to TwitterShare to FacebookShare to Pinterest
Labels: 1/64, Gaslands