AWI: The British Are Coming!

Here's the first three line battalions of Brits for the AWI collection, based for Black Powder: Rebellion!

Battalions with yellow, green, and white facings to begin with.

The figures are from IMEX (previously an Accurate Miniatures production) Set 512 British Redcoats and as mentioned in a previous post these Accurate/IMEX figures are slightly shorter than their compatriots and enemies in the same scale, so they have received the Litko 3mm bases.

I started with three out of the four 'action' or advancing/charging poses this time, rather than creating a firing line (or three) which will follow later.

The painting is a mix of a commission from my mate Spiro and over-finishing by me (not that they needed it - so read messing with stuff) after I looked at the style of the Hesse-Cassel brigade finished previously (sorry Spiro I had a moment of sheer OMG paranoia, painting style). This is a good reminder to everyone to sort the painting style out before you hand the figures over to a painter. 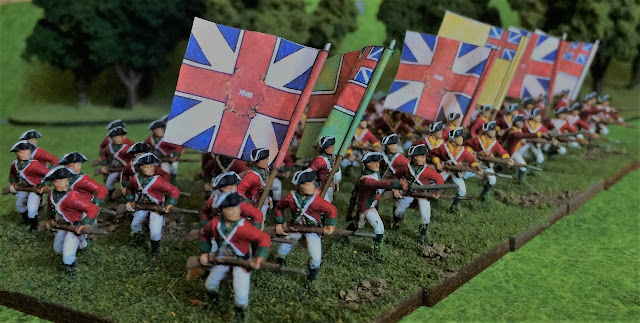 The standard bearers are converted from the other charging pose in the set and the wonderful flags are once again from warflag.com - just awesome having this resource available for free!

From L to R: Revell SYW Prussians, IMEX AWI British, ACTA British Light Infantry
Not completely happy with the differences of size from the manufacturers for this scale/period and am now close to calling the A Call To Arms figures at 17mm. But for arms length cheap figures - meh!

In the heat of battle, after the sugar, fat, salt and alcohol has kicked in - after copious amounts of coke, beer, pies, and chips (crisps for our UK friends), I'm not sure I'm going to notice or care as they look acceptable against the other figures :)