... Mirbach sighed, moving forward past his adjutant, straining to see the dispositions of his brigade through the dust, as an infantry major rode up beside them expecting new orders.
There was still no sign of Lossburg's fusiliers, expected overnight, and he had had to fill the gap in the lines with a detachment of grenadiers.
At least they had shown up, he thought. The large combined detachment from the south, including his own grenadier companies, had arrived just after dawn, just as they had been sending out the Jager companies to reconnoiter before the brigade.

It had been a hard decision to split the large detachment into two, but with both battalions of his regiment leading the brigade, supported by only one other battalion, he knew they would need further support. So he'd reserved a battalion strength group of grenadiers and sent the rest forward.
'Still no sign of Lossburg'.' said his adjutant to the young major, who nodded in reply, steadying his horse and searched forward through the dust.
Mirbach could now see that the grenadier detachment was moving to the rear of his battalions as instructed - happy that he had split out the colours between his two battalions, so as to readily identify the units in the field - and had now taken their place alongside the Prinz Karl troops.
These in turn were following the day's standing orders and crouching down behind their sister regiments as if to receive horse, to avoid the errant bounce of canon balls .

While acknowledging the wisdom of the practice, Mirbach could not abide the slack and lackadaisical practices of the British and the rebels, who allowed their men to sit or lie on the ground as if at a picnic, when in reserve.
Considering it hadn't rained for over a week in the area, he conceded that ordering men in the rear units to go 'low', was a practice of some merit and would otherwise reduce the casualties expected from canon fire that day.
After all, he mused, one high ball had already sliced a tassel off of the first colour of his regiment and it was not yet nine'o'clock. But at least the soldiers of his brigade would rest at the ready and look respectable as they held their formation.

Suddenly, in the distance, a huge line of grey puffed smoke rose before his brigade, followed closely by a muffled and staggered roar; the rebels had started firing.
'Send a rider out,' he said finally, turning to his adjutant, 'we need Lossburg's troops here now...'

So something a bit different - after a comment at a recent Sudan Black Powder game regarding the lack of colour on the wargame table ;) - the first brigade of my AWI collection ready for Black Powder. 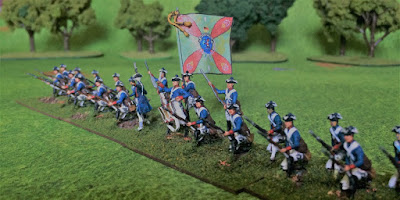 Another standard unit of musketeers from the Revell Prussian set.

The slightly converted Jagers are from set 02574 Austrian Infantry.

A company of skirmishing Jagers - a small BP unit of 12 figures.

The command is a mix of the mounted officer from the Prussian set and I think, slightly converted 'officers' from set 02579 Austrian Artillery.

At this scale there is not a lot of discernible difference between the uniforms of the two periods - if any - and 'slight conversions' only involve slicing off errant plumes from hats - and other spurious bits of uniform and equipment as desired - with an Exacto knife, so these sets have been commandeered into line for AWI.

The awesome flags are once again from warflag.com, poles made from brass and bits off of the molded flags of the standard bearers from the Prussian set. 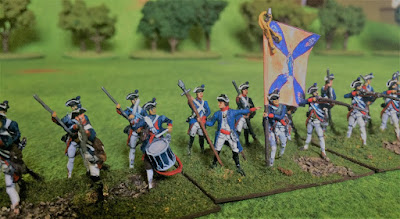 The paint job is a mix of a commission from Fernado Enterprises in Sri Lanka and my own efforts, from quite a few years back. The commision figures are a reasonable standard - called Collector - for the money paid.

There is such a lot of variation within each nationality which, while it puts some folk off this period, a little careful reading can provide a great deal of nuance.

Far right, freed African slaves in paid service with the German mercenaries, many of the younger men and boys were employed as musicians.

All have been recently rebased for Black Powder and all in all I'm happy with the final result, and looking forward to a table covered in the bright colours from the uniforms of the period. 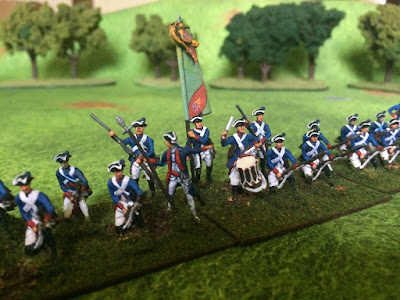 1st battalion, line regiment Prinz Karl,for a 24 year old set of figures, they have come out great.
Posted by Jackstorm at 16:54