Like buses, painting BP units seems to be, one every so often and then three of them turn up at once.

With a bit of time on my hands during holidays, I was able to finish off the 3rd commission from Spiro at Pants of War, some AWI French; destined for Black Powder.

The 20 year old figures from Italeri certainly suit the French Ordnance colours from 1779, and the Warflag flags just keep on giving - but the drummers got their 'toy drums' sliced off and replaced with Italeri American drums as per the previous unit.

The pink/apricot of the regiment's colours took some time to get 'just right' and I started to like the white uniforms offset by the royal blue of the musicians and flags. 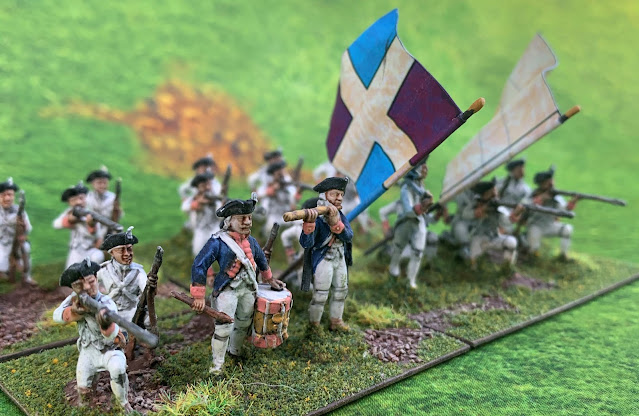 The flutist seems to be snacking on a gold, 2-foot long, Subway sandwhich, but hey, the figures lent themselves to picking out details pretty well for 20mm figs.

If the Touraine colours took a while to get right, Soissonois took even longer and required a trip into our local model shop, Acorn Models, to pick up some Vallejo paints (Years ago, GW used to produce the perfect paint, which I'd bought, let dry up, and now their layering system just doesn't have the same brightness - I want a dollop of paint highlight at this scale, not hours of layering). But Scarlet Blood + Squid Pink + a small dollop of Citadel Xereus Purple for darkening, has done the trick. 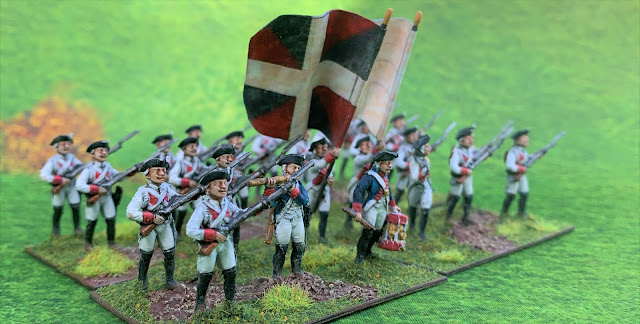 Which brings us to one of my favourite colour schemes of the AWI, the Royal Duexponts (and similarly the Lauzun's Legion troops and Brunswick Dragoons).

Unfortunately it seems the officer got a blast of gunpowder in the face, as his detail is missing, but the colouring is just superb.

I know the yellow should be 'lemon' but having highlighted this colour over Spiro's base contrast yellow, I liked the deepness of the yellow and there are three units of Lauzun's infantry to come, so they can be lemon yellow.

Including the regiment Saintonge finished before Xmas and the Bourbonnais finished back in June, that's another five BP standard units down, so enough to field the French as a separate BP brigade.

There is a real risk here that a wargamer will actually finish his lead/plastic mountain for a given period.

Will have to wait until January to pick up the last of the French from Spiro and in the meantime, I've prepped up the last three units of Germans for the collection.