... Mirbach had wasted no time in utilising the reinforcements that had arrived shortly after lunch. Not they were really reinforcements, he'd been waiting on Lossberg's fusiliers since daybreak. But finally Lossberg had arrived with his expected battalion, along with von Rall's battalion, some Brunswick Dragoons and a unit of mounted jaegers.
The morning had been a stalemate, primarily becuase Mirbach could not force home their objective without the troops he'd been allotted. But now he would drive through the rebels and meet up with the British as planned - albeit, four hours late...

... or what I did with the rest of our summer holidays - finishing the German regiments in my BP AWI collection. Yes, this portion of the collection is done. Complete. Finished, and take their place along side the other 7 units started in 2014 and based in 2016!

While there may be a command stand to come at some point, its nice to get something completed for this collection.

There was one more German grenadier unit on the plan and having started researching uniforms again after all those years, I found that Rall's regiment was actually formed from scratch and had its's own colours - rather than being combined from line units. So, along with the 'straw-coloured' waistcoat and trousers, and gold 'metal' colour, a unit of grenadiers with flags was a no-brainer. The flags came from a search on the Dr. Goolgle and resized for scale - but more on that later.

Chosen mainly for their flag colour in 2016 and mentioned in my little vignette from that post, these guys were satisfying to finish, mainly because I'd set an expectation, and 5 years, 1 month later, they were a thing 😆 The flags are once again from the brilliant warflag.com.

Both Rall's and Lossberg's battalions were created using HaT's Seven Year's War Set 8280 Prussians Marching and Set 8282 Prussian Command, and have awesome detail for 1/72 scale figures. For this scale, the slight differences between the theatres make little difference - so quite a few 7YW sets have been used for this collection.
They all come with separate hats and you can chose from musketeers, fusiliers or grenadiers. These were very tricky to put on, the figures and hats needed some flashing removed and a good deal of patience when gluing. 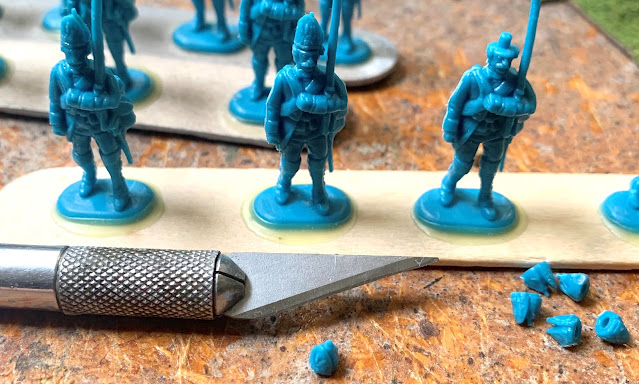 As you can see from the picture above, the hats are tiny - the exacto-knife shows the scale. But the couple of hours spent gluing the 50 hats paid off in the end becuase of the excellent detail - including the back of the headgear.

Finally, if you use the standard bearer's flagpole, as I've done, then the flags have to be a bit smaller than scale to fit between the figure's shoulder and the tassels at the top of the flag. This makes the flags about 2.3cm, rather than the 1/72, 2.77cm, for flags roughly 2 meters in size.

While there's been some 'tactical' thought to what units to field over the years, to make balanced BP armies, the whole point of this collection was to get colour on the table. So, with that in mind, I couldn't go past a unit of Prinz Ludwig dragoons from the Brunswick troops.
They're converted from Set 02579 Austrian Artillery from Revell's SYW range. I chose them primarily for their knee-high boots and stick-like artillery thingys - that at this scale can be painted as swords. Most figures had an artillery-baggy-thingy at the front of their belt, which needed some gentle carving to make into normal belts, and other figures needed something to hold, so some hasty conversions providing them with muskets were made - cutting up spare figures from Italeri's Set 6060 American Infantry.

The guidon (flag) is from another Dr Google search and these make for another small skirmishing unit for the German brigades.

Part of balancing a brigade in BP: AWI Rebellion, for me at least, is to ensure each brigade has access to a small unit of light horse of some description.
Having made the embarrassing mistake of asking if anyone had a picture of the Brunswick Dragoon's horse furniture, I quickly realised that that unit was sent to America without any horses and never procured them while in theatre - fighting only dismounted. So another unit of mounted jaegers was produced from Revell's Set 02573 Austrian Dragoons.
The uniform is based on the BP supplement and a Google search.
Along with every other unit completed here, it just goes to show that looking at periods either side of the conflict you have chosen, at least for 1/72 scale armies, enables you to field just about any unit you'd like - with only a bit of patience and suspension of belief.
Next up, some B and B miniatures British Grenadiers.