Gaming Black Powder at 1/72 scale, when buying plastics at least, means often compromising when it comes to the number of figure poses available in a set. You either get too few or - like me - buy as many boxes as you need to produce regular BP units. But then you're left with figures left over of the poses you like and the poses no wargamer should ever be seen fielding.

So the first answer to the question 'what do you do with all the spare figures that aren't terrible poses' is simple; reserves.

I bought three boxes of this set and produced the Hessian Brigade posted previously. The left overs include five of the marching pose and three sets plus a spare NCO, provides the perfect number for a small BP battalion.

The paint job is by Fernando Enterprises from years ago - facings touched up with a brighter green - and again was excellent value for the money. The likely role for this small unit is as a cheap(er) support element for a brigade. Despite its size and poorer fighting stats, it'll be as good as any standard sized unit in the support role.

I think I bought two of these boxes to create the Jagers for the Hessian Brigade. Hmmm, you get eight poses receiving horse, unlikely in the AWI, so these guys are 'going low' to avoid bouncing cannon balls while the left over firing poses do their thing.

Again the paint job is by Fernando and is OK - because I provided vague instructions; the cross straps, facings and turnbacks aren't right and the shading needed some touching up but - meh - this regiment can take its place at the back somewhere also in support. The common 'Don't Tread on Me' flag is off the internet, using MS Word to produce a 'double sided' flag and converting the moulded flag on the standard bearer.

Having botched together smaller or less than regular units, the other answer to the question above is simple, swap or give away spare decent poses to mates and for the crap poses, pilfer the guns and hats for conversions or dump the figures in the recycling. Its only cheap plastic after all.

Next up on the painting table is this 1/1 scale cat, nearly finished and which - even if I say so myself - looks incredibly realistic. It'll take its place along the other reserve units for BP AWI. 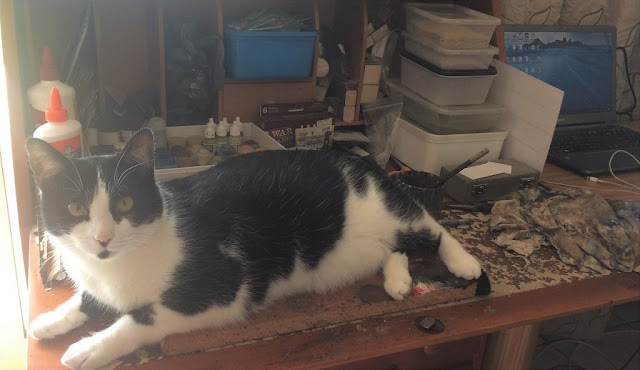