Forces of the Black Flag make their way towards the Dihilbat Feature from the direction of Tamai.

It was a particularly blistering hot day near Hashin as the Indian brigade and elements from General Graham's second brigade made their way through the valley between Beehive Hill and the southern end of the Dihilbat Feature. As two huge palls of dust rose in the north, east and west of his position, he did not need the confirmation from the recently returned scouts to realise there were two large Ansar forces heading his way. It was time to deploy...

What follows was an excellent game with three good fellows from the Grumpy (old man) Shed Group who acquiesced to fight the Hashin 'what if' scenario previously reported.

Set up almost exactly matched the first battle only on a slightly larger game area, so see the previous post for maps. Also a couple of units were added to both sides.

Green flag begins their advance through the low spurs of the Waratab.

Unlike last time, the Ansar came in from both the direction of Tamai (top photo) and the Low Spurs of the Waratab (photo above), from both corners of the board.

Indian Brigade deploys in the depression between Beehive Hill and the Dihilbat Feature, with elements of 2nd Brigade on the southern spur of Dihilbat.

Turn One
The Anglo-Egyptians held firm in their starting positions as the Ansar advance began, although the main body of the Black Flag rub failed to activate.

Green Flag after turn one, moving through the spurs and pausing at the edge.

Tim moved the Indian Brigade over to the left to make room for the 2nd Brigade, who came off the Dihilbat spur, causing dispositions to almost exactly match those of the actual battle, and sent the 9th Bengal Lancers forward into the desert.

Turn Two
One good command roll later and it was all on. The Green flag rolled well enough to rush across the board from the right flank, through the low spurs and into the Indian brigade.

After closing fire, the square held firm and the fighting continued into the next round.

On the left flank, again the Riflemen of the Black Flag forces failed to activate and were left at the northern end of the Dihilbat spurs, as the 9th Bengals raced across the board to get behind them.

The Coldstreams took to the left flank Dihilbat spur and fired.

Causing the lead element of the Black Flag spearmen - who had shot forwards behind the left side of the Dihilbat Feature - to become disordered.

In the center the Scots Guards had joined the Indian Brigade and immediately closed the brigade square as the fighting continued.

Which was fortunate as even though the right-most Sepoy repulsed the first wave, the battalion succumbed to the continued onslaught and was destroyed.

Turn Four
The Ansar rushed into the gap, smashing into the Scots Guard in their flank...

... but were caught by traversing fire from the Screw Guns on the hill and retired from the battle.

Still the square held firm even though the Gardner had become Disordered...

... and was reformed into a 'harbour'/triangle/squarish thingy (the maths was too hard ((3x6)+1)/4=... triangle!) as fierce firing and fighting caused disorder amongst the Hadendowa and the 5th Sikhs to become shaken.

Meanwhile the Blag Flag spearmen raced up the left face of the Dihilbat, smashing into the Coldstreams, who held firm but were Shaken for their efforts.

The 9th Bengal Lancers, who had previously rushed completely across the board to try and flank the Black Flag, were finally reined in and turned around to hit the trailing Green Flag spearmen in the rear...

Causing a surprise outcome for both sides.

Where'd everything go - total destruction in the center of the board.

Turn Five
The center held firm for the Anglo-Egyptians with the Sikhs repulsing the wave of Hadendowa, making serious inroads towards breaking the Green Flag rub.

But on the left flank the Black Flag began its attack in earnest as the 2nd Brigade moved up in support positions.

The Coldsreams took the brunt of the continued assault, supported by the Royal Marine Light Infantry (RMLI) and Berkshires below.

They succumbed to the prolonged fight but pushed back the attacking Ansar horde before they too fell back.

Turn Six
The Black Flag assault continued with a fresh wave of Beja spearmen rushing headlong into the RMLI.

Who immediately crumbled under the assault after the Beja re-rolled missed H-2-H for six hits.

The Blag Flag skirmishers took up positions on the Dihilbat to continue to rain fire down on the Berkshires.

Meanwhile back in the center a wave of Hadendowa raced up Beehive Hill to assault the artillery position...

...and ended up completely annihilating it.

Not sure what happened, it was the heat of the battle and seem to have missed a few photos. Suffice to say that the Green Flag Rub - almost broken - ended up entirely pressurizing the Indian Brigade.

The Black Flag skirmishers and Riflemen continued to harry the Berkshires from the peak of the Dihilbat Feature... 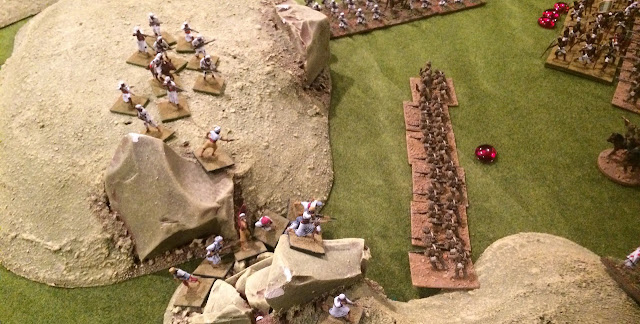 ... until they too succumbed.

While streaming over the Dihilbat, this was one of the last things the Coldstreams saw...

This final Black Flag assault entirely decimated the 2nd Brigade, leaving the Indian Brigade battling on in the center, but now completely enveloped.

And in the last round of combat, the 5th Ludhiana Sikhs fell, taking a body of Hadendowa with them, and the game was called.

This was another well fought and close game, 2-1 to the Ansar.

Mike and Stephen ended up enacting classic Ansar skirmish and envelopment tactics, much to the glee of this SOG.

The battle provided a good demonstration of why General Graham, forces over-extended and without the close and mutual support of full brigade squares, chose to fall back on the 21st March 1885.

So hats off to Tim who endured especially well given he had no choice but to fight, faced two opponents, overwhelming numbers, and alls I did was hang about making umpirish noises and cracking jokes 👍