For nearly 300 hundred years the Seleucid army was one of the best in the ancient world.

The core Seleucid troops were armed with a lance called the Xyston and were collectively known as Xystophoroi.

It's cavalry increasingly became more armoured over time until horse and rider were completely encased in metal armour - long before the knights of the medieval period. These knights were called Cataphracts and employed successful shock tactics.

Unfortunately, after nearly 20 years using this army, I have yet to paint up any cataphracts and have concentrated on the lesser armoured Xystophoroi.

Core of the Seleucid cavalry were armed with the long Xyston.

Once again the Frei Korps bags of figures allow for significant variation at 15mm and their Greek, Macedonian, and Seleucid cavalry bags were used for this army.

As with foot troops, the Seleucids and Successor armies also employed a raft of lighter, auxiliary cavalry from their allied or conquered Greek and Asiatic states.

Seleucus himself, one of the generals available from the 'personality' bags available in the FK Successor range.

Philip V, also from one of the 'personalities' bags.

The Companions were the best cavalry of the army.

Anachronistic but couldn't resist fielding Alexander and his companions, painted by Le Chasseur. 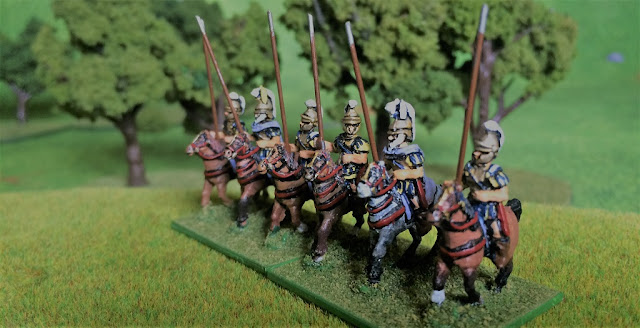 Actually from the Greek Xystophoroi bag, not sure why I didn't use the Seleucid Agema available in the FK range.

From the Greek Heavy Cavalry bag.

The FK Macedonian Companion cavalry bag provides for Greek Cavalry - based on the uniforms from the Osprey book used as a reference. Think Le Chasseur painted the stand on the far left, the ones on the right are painted as Thessalonians.

Tarantine mercenary cavalry were considered to be some of the best light horse available early on in the period.

Scythian horse archers were used throughout the period, some of these were also painted by  Le Chasseur.

Not the best of troops but good for guarding the camp... or leaving in the box...
Posted by Jackstorm at 10:03