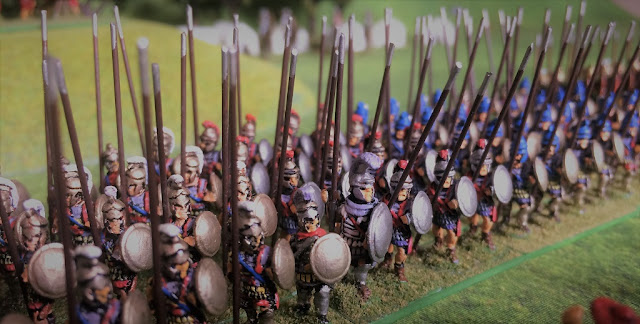 Here's the phalanx finished so far from my 15mm Frei Korps Seleucid/Successor army.

A mix of Macedonian and Successor phalanx blocks, but no Asiatic blocks - they were too dismal on the field!

These figures produce a great 'heghog of spears' effect. The Sarisas themselves are made from piano wire.

Shot of the detail on the back of these figures.

The FK bags of Phalangites allowed the individual blocks to have a mix of equipment; the back two ranks wearing only tunics.

PS: It now looks as though the FK phalangite range is no longer available, at least its not listed in the TTS/QRF Macedonian/Successor product range. This is a real shame as these figures paint up well. I have two blocks still to paint up... of perhaps the last ones on the planet!?

The elite phalanx unit on the field along with their mounted equivalents the Companions.

Perfect block to include the outstanding FK pike general figure.

Complete with bright blue Phrygian helmet and often referred to by players as smurfs.

Two blocks of Macedonians the elite unit (below) - purple theme and regulars with rose tunics (above).

They certainly make a colourful couple of blocks.

A good example of the mix of panoply equipment in the FK bags.

Successor Phalanxes
Some liberty taken with these units, based on the Macedonians and assumed to be fairly well equipped with their own unit colours.

This unit also has one of the FK generals attached.

There's a crimson helmet lying on the floor of one of the plates in the Osprey book I used as a reference for this army - couldn't resist a unit made up with this helmet.

This is a well outfitted veteran unit with full panoply for all ranks, but not all the Phalangites could afford or had earnt the right to wear a pulme - the mix of figures in the KF bags allow for this nuance.

One of the poorer regular units, no plumes on their helmets and a mix of panoply.

That's it so far. Its only been 20 years and think I still have one or two blocks to paint up.

But seems rules nowadays only require two ranks instead of the blocks of four of old... oh well.
Posted by Jackstorm at 17:53